• You’ve done research and you will continue to find sources

• Organize your sources based on the headings of each paragraph

• Write the author and year (and possibly page number)

• This is a great place to include direct quotations

• Using your annotated bibliography, write sentences in your own words or use direct quotations from the source and put them in your outline to fit the topic sentences. 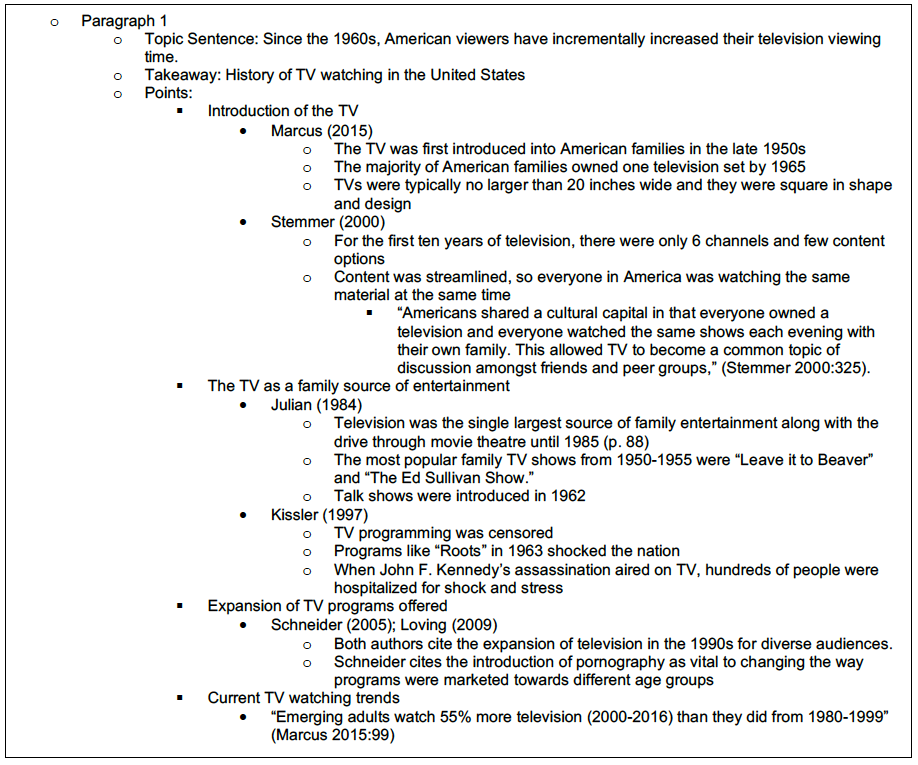 • Now that you have a thorough and detailed outline, you can start the writing process

• Divide your page/word document by each paragraph so that you stay focused on one topic; your essay will stay coherent and well-organized this way

• This also helps you to see which authors you refer to, thus avoiding plagiarism

Since the 1960s, American viewers have incrementally increased their television viewing time. Television was first introduced into American families in the late 1950s. The majority of American families owned one television set by 1965. TVs were typically no larger than 20 inches wide and were square in shape and design (Marcus 2015). For the first ten years of TV in America, there were only six channels and few content options. Content was streamlined; everyone in America was watching the same material at the same time. Americans shared a cultural capital in that everyone owned a television and everyone watched the same shows each evening with their own family. This allowed TV to become a common topic of discussion amongst friends and peer groups,” (Stemmer 2000:325). Due to its popularity and cultural value, television became the single largest source of family entertainment along with the drive-in movie theatre until 1985 (Julian 1984:88). The most popular TV shows from 1950-1955 were “Leave it to Beaver” and “The Ed Sullivan Show.” Talk shows were introduced in 1962. (Julian 1984). Given the wide audience, TV programming was censored and programs like “Roots” (1963) and the news documentation of the JFK assassination shocked the nation (Kissler 1997). However, as audiences diversified, TV programming expanded to meet a wider variety of audiences in the 1990s (Schneider 2005; Loving 2009). Schneider points out that the growth of pornography was chiefly responsible for the addition of adult-only content in TV programming (2005).