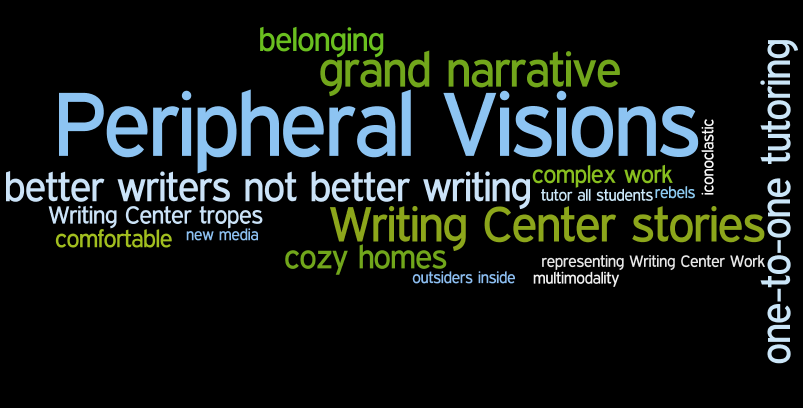 Jackie Grutsch McKinney is an associate professor of English at Ball State University, where she teaches undergraduate and graduate courses in rhetoric and composition. Over the last eighteen years, she has worked at three different writing centers as a tutor, assistant director, and then as a director. Her book, Peripheral Visions for Writing Centers, has been awarded the 2014 International Writing Centers Association’s Outstanding Book Award.

Chris Earle is the TA Assistant Director of the Writing Center at the University of Wisconsin-Madison, where he is currently working on his dissertation in UW’s Composition and Rhetoric program. He would like to thank Professor McKinney for generously sharing her time to talk about her work.

Last October, Professor Jackie Grutsch McKinney joined the Madison Area Writing Area Colloquium to lead a lively discussion centering on her recently published book, Peripheral Visions for Writing Centers (2013 Utah State Press), which has since been awarded the 2014 IWCA Outstanding Book Award. The project, the talk, and Professor McKinney’s argument has stuck with me. On more than one occasion, I have been given pause as I find myself retelling, maybe too uncritically, what McKinney aptly names the Writing Center grand narrative. Demonstrating the persuasiveness of Mckinney’s account, in these moments I find myself asking—and not always answering—what work gets accomplished in this (re)telling and, more importantly, what aspects of our work it leaves out?

When I began thinking about a topic for my post on Another Word, I immediately thought how great it would be—for readers and for myself—to continue the discussion that began at the colloquium last fall (and that has certainly continued since). Luckily, Professor McKinney was kind enough to give us a behind-the-scenes look at her project, its origins, and its (overwhelmingly positive) reception.

Chris: For those who haven’t had a chance to read Peripheral Visions for Writing Centers, how would you describe the project and the questions you take up in it?

C: Can you tell our readers about the origins of this book? Was it, in part, the realization of the mismatch between the sprawling, expansive tasks a writing center director might do on any given day (as you detail at the book’s opening) and the grand narrative?

JGM: Origin stories are hard! I was going to say that the book started with the article, “Leaving Home Sweet Home: Toward Critical Readings of Writing Center Spaces,” published in Writing Center Journal back in 2005. And, that is true. That article—inspired by a conversation in the first graduate course I taught—was the first place I started to unravel the writing center stories we tell. From there, I started to think about critical readings of other writing center stories.

However, now that I think about it, years earlier in my master’s program, I did a project on writing center spaces and design—in fact, that project became my very first IWCA presentation. So now that I think about it, that project figured into my interests that helped me shape that graduate course which shaped the article that started the book. It’s funny how things come together, isn’t it?

JGM: That’s a really good question. I think I make gestures to it being both A and B in the book. As many others have written, discourse communities give us language, tropes, genres, and so forth for communicating, and I think that happens within the writing center community, too. An easy example is Stephen North’s axiom: “our job is to produce better writers, not better writing” and the whole of “The Idea of a Writing Center.” Of course, it feels like when I teach a writing center course or give an orientation to my tutors that they should read this article because it shows up in so many other articles. It feels like sort of like a shibboleth—knowing that axiom is like a badge of belonging.

But, Beth Boquet and Neal Lerner did a nice job of problematizing the allegiance to and continued citation of North’s article a few years back in College English. What is it about this axiom—“better writers, not better writing”? I’m not sure I even know what it means or that I agree with it. Does anyone? Does it really best capture my work or your work?

C: At the end of Chapter 4, you make a claim that really stood out to me: “Here’s the truth: a writing center can be effective in any size or configuration. A writing center is exactly as big and as influential as the ecology allows it to be” (55). Can you say more about this claim and its implications?

JGM: Sure. I think it’s easy to get swept away in a pursuit of progress. I want to, say, add programs, increase my staff, increase tutoring, add faculty support, launch social media for marketing and writing feedback…yet, at the end of the day, I still have my same budget and the same hours in a day. It’s easy to walk away from a writing center conference believing your end goal is getting every single student on campus in for tutoring every year, and, feeling inadequate when you don’t do that. It’s almost comical how writing center people will ask you your “numbers”—meaning how many students you are tutoring each year!

Yet, in my recent tour as writing program director, that numbers game was put in perspective. There, I fought to keep our numbers reasonable and in proportion to already existing resources. “No, we cannot add three more sections because I don’t have teachers.” “No, we cannot overload these classes because instruction suffers.” This taught me that I need to set goals based on existing resources and educational principles (not on what others are doing at other institutions) and set more resources in place before setting plans for growth. If the institution demands more, I’ll demand more resources to make it happen. (I could say more about how being tenured can ease this pressure, too, but that’s a conversation for another time.)

C: You argue that the narratives we tell shape our research agendas (19). Is there a particular research   problem or area that you think scholars have been dissuaded from taking up because it doesn’t factor prominently enough within the grand narrative? Do you feel that this has been the case with your own research?

JGM: I suppose there are probably many examples. Writing center scholarship is odd—in that we probably send folks to more generalist journals when their ideas/focus exceeds what we see as “writing center.” Personally, I’ve been questioned about the relevance of multimodality for writing centers. I’ve been told that not all schools focus on multimodality so it isn’t an issue for all directors/centers/tutors/readers. So, part of the argument I felt compelled to make in “New Media Matters,”[1] for example, was that it multimodality should be a concern for all directors, regardless. I think that enough folks have made that case now that it is seen as more central? I’m not sure. The argument that I make in Peripheral Visions is that we tend to see legitimate writing center work as those things all of us do (i.e. tutoring), instead of seeing what all of us do as legitimate writing center work worthy of scholarly inquiry.

C: While reading Peripheral Visions, I found myself thinking about audience. Can you say a bit more about potential benefits and risks of narrating the Writing Center differently—of not telling the grand narrative—to non-Writing Center audiences?

JGM: Yes, I fielded this same question just last week when speaking about the book to folks in North Texas. It’s a concern. I think in many contexts writing centers are understood as tutoring centers, so if one upends that story, others might object. But I also think outsiders (and I believe administrators or “higher ups” is who we’re talking about here) are keen to hear new stories. What if we told them that we provide the best writing support we can to students however they need it? What if students need spaces or equipment or money or more instruction in addition to or instead of one-to-one feedback—can we give those things? Can we be advocates for those things? I think many writing centers already do. Can we start to talk about those things as being as central as tutoring?

C: Can you talk a bit about the response to Peripheral Visions? What, if anything, has surprised or otherwise interested you about how people have responded?

JGM: Overall, the feedback has been tremendously positive. Colleagues have emailed, facebooked, and tweeted; speaking requests have come in. Reviews in Writing Center Journal, Writing Lab Newsletter, and WPA were thoughtful and largely complimentary. Sure, some folks don’t and won’t agree with my arguments; that’s to be expected. But since this is my first book, it’s still just really surreal to see my name on the cover!

C: You conclude on a hopeful note: despite how entrenched the grand narrative is, you suggest that it is possible to change it. What are you thinking now about the possibility of changing it? Have you noticed any movement in that direction—the stirrings of rival (or local) narratives? Do you see any evidence that peripheral visions are taking hold?

8 Replies to “An Interview with Jackie Grutsch McKinney, Author of Peripheral Visions for Writing Centers”