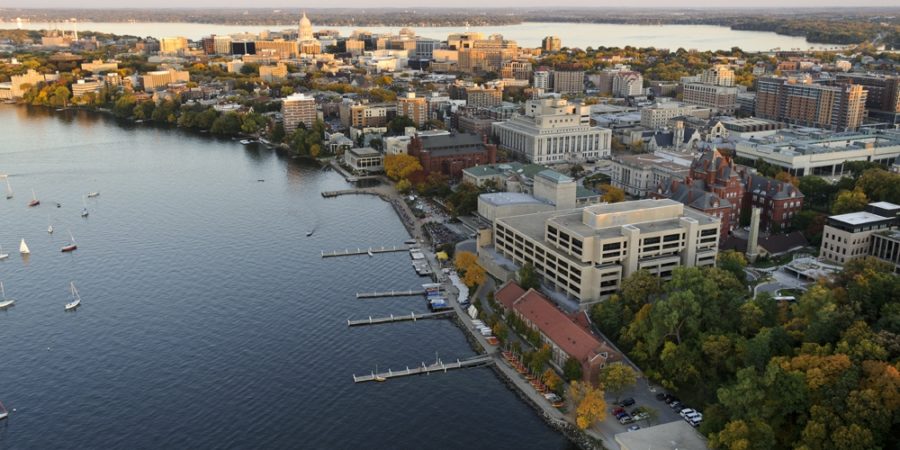 On November 8, 2019, the UW-Madison Writing Center hosted a day packed chock-full of activities and events to celebrate its 50 years on campus. To provide a taste of the Writing Center’s evolution over time, we’ve included the slide show that Emily Hall and Nancy Linh Karls, Writing Center and Writing Across the Curriculum Interim Co-Directors, provided during their afternoon remarks.

Those who visited the sixth floor of Helen C. White Hall on November 8 were treated to an array of events, which included the following:

WRITE-A-THON
Those working on dissertation chapters, research papers, creative theses, or any other writing project were invited to “write alone together” and to write as much as possible during the five-hour Write-a-thon. Although modeled after our Graduate Writing Groups, we encouraged any and all writers to attend. Coffee, tea, fruit, and pastries helped participants to remain energized throughout.

LUNCH AND A DRAFT
At noon, a group of undergraduates joined Professor Ainehi Edoro for lunch and a conversation about her latest book-in-progress, Forest Imaginaries: How African Novels Think. In this intimate and interactive lunch with the writer and scholar, students had the chance to talk with Edoro about her own writing process and then workshop an excerpted chapter of Forest Imaginaries, offering their comments, questions, and suggestions to the author.

WRITE WITH BUCKY
Writing activities with Bucky Badger took center stage at 1:30 p.m. with the arrival of the university’s esteemed mascot, this time carrying a giant pencil. Visitors enjoyed sweet treats and a variety of giveaways. While Bucky found himself unable to enjoy the cookies at hand, he did take over the Writing Center’s reception desk duties for several minutes.

OPEN HOUSE
The open house highlighted Writing Center programs and initiatives, while cheering 50 years of growth and continued partnerships at UW-Madison and throughout the greater Madison community. Those who attended were able to . . .

As chair of the English Department, I am proud and grateful to claim the Writing Center as “ours”, even though—or should that be ‘because’?—it is a center of excellence that we share with the campus at large and communities in Wisconsin and all over the world.

the Writing Center’s vitally important role on this campus: that of offering crucial guidance and assistance to more than six thousand undergraduate and graduate students each year—not to mention faculty, staff, and members of the Madison community—as they seek to understand and be understood through good writing.

Longtime Writing Center director Brad Hughes said that “a research university is a writing university.” What he meant was that rigorous thinking about research happens through writing—and, even before that writing is shared publicly, through talking about writing.

When remarks wrapped up, those who had gathered for the open house wished the Writing Center a happy birthday, warming the room with their goodwill.

Afterward, the cake cut and consumed, celebrants dispersed into an evening already making its way into darkness. Yet Wilcots’s final words still seemed to reverberate as he thanked present and former staff for all that they do “to ensure that the wonderful legacy of the Writing Center continues to grow and shine across the UW-Madison campus. Here’s to 50 more years!”

Aaron Conklin, in his recent article “Write On!” further underlined the Writing Center’s essential and growing role as he reflected on a half-century of work on writing within the broader university and even beyond:

As the Writing Center blazes into its second half-century, it is prioritizing an ever-increasing number of initiatives, including a focus on diversity (the Center just added a half-time coordinator of diversity, inclusion and social justice issues)—and a series of partnerships with local schools, neighborhood centers and libraries to bring the Center’s writing expertise further into the community. That’s top of mind for interim co-directors Nancy Linh Karls and Emily Hall (who also directs the Undergraduate Writing Fellows program).

“That, I think, is really in line with the larger mission of the Wisconsin Idea, but also in line with what’s happening in the field throughout the country,” says Hall. “We don’t want to be the silo. We want to support writers where they are.”

And these days, they’re everywhere. Maybe you recall taking the elevator to the sixth floor of the Helen C. White Building, where a graduate teaching assistant spent an hour or so enlightening you on the virtues of topic sentences and changing passive to active voice. The Writing Center is still headquartered in Helen C., but its presence on campus has exploded like a glitter bomb.

As we head into the next years together, we find ourselves with deep and abiding appreciation for the 35 years of unflagging leadership provided by the Writing Center’s longtime director Brad Hughes, whose legacy continues to unfold daily. We are also incredibly grateful for the faculty and staff, campus and community partners, and cadre of Writing Center instructors, Writing Fellows, and career staff that have supported us on this 50-year journey. Without you, we wouldn’t be where we are.

This event was made possible with generous support from the Anonymous Fund of the College of Letters & Science.