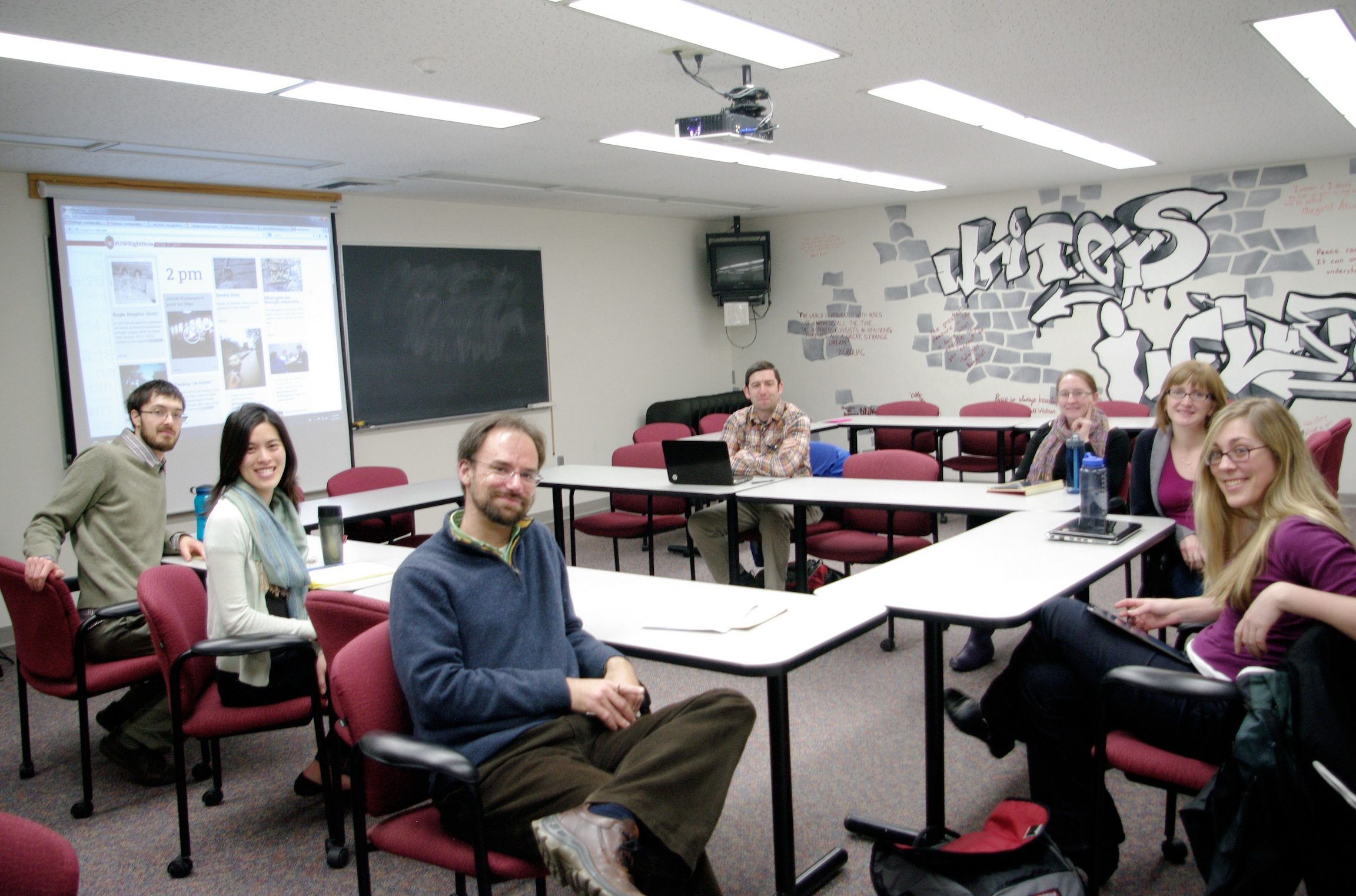 By Mike Shapiro, a graduate student and the online coordinator of the University of Wisconsin–Madison Writing Center.

At its best, Twitter looks like the perfect tool for promoting any writing center’s goals: it privileges writing, supports lively conversations, and develops long-term relationships between writers and readers. Twitter can remind students, faculty, and administrators, every day, of the center’s services. At the same time, Twitter can help writing centers around the world stay in touch, sharing new programming and approaches.

huge shout out to the @uwwritingcenter, thank you for being amazing!

For our Writing Center at UW–Madison, the reality of how we use Twitter falls short of this ideal. This spring, I got the chance to work with a team of instructors who turned their critical eyes on our Twitter feed. We compared our tweets to those coming from other centers, and to tweets coming from campus programs that use Twitter to build strong relationships with students. This exploration confirmed for us that Twitter is not merely a powerful vehicle but a necessary one for our Writing Center, a tool that gives us one more way to work directly with our students and to help them see themselves as writers.

The infancy and toddlerhood of @uwwritingcenter
Our experiments with Twitter in the writing center began in September 2008, when I emailed our director at the UW–Madison writing center, Brad Hughes, and Rik Hunter (@rikhunter), that year’s online coordinator, to suggest we use Twitter as a “notification service” to establish @uwwritingcenter as “a digital Vacancies / No Vacancies sign.” At first, we just used Twitter to broadcast availability at our drop-in satellites around campus, so students turned away from our busy table at College Library could see there were plenty of openings across the street at Memorial Library. There were anecdotes about students who found their way to an opening because of our Twitter feed, but no proof that the time our administrators and tutors dedicated to tweeting was building a better relationship with students.

Standing alone at the party
It turns out that our center was not alone in this broadcast approach to Twitter, or in its suspicions about its effectiveness. Jackie Grutsch McKinney (@jrgmckinney), of the Ball State University Writing Center (@wc_bsu), observed in a 2010 column in the Writing Lab Newsletter (@WLNewsletter) that writing centers use Twitter almost exclusively to “provide information,” rarely using it to engage students. This struck McKinney as “so un-writing center-like.” Jennifer Marciniak of the University of Louisville Writing Center (@UofLWritingCtr) ran the same survey more recently, and again found that centers—including our own—had largely ignored McKinney’s advice and continued to use Twitter as a broadcast tool.

If the whole point of social media is to be social, why was our center using Twitter like the digital equivalent of taping a poster in the elevator? One social media expert (Joel Ninmann of @HousingUW) encourages institutions to think about Twitter as a kind of party, with its cacophony of voices speaking at once. The broadcasting approach, he says, is the party-going equivalent of standing alone in the corner spouting out your observations to no one in particular. To become a popular kid at the party, you need to interact with the other people who are there and slowly build those interactions into a relationship.

Do we even need it?
Marciniak found that students, unlike centers, are very good at using Twitter to create genuine relationships, to talk to each other at the party, but she also worried what it might mean for a writing center to copy students’ social media tricks. Would we oversaturate our campuses with frivolous side conversations? Or invade our students’ (perceived) privacy? Could the tweeting center waste its limited time on a social tool that could, in five years, look as faddish and short-lived as MySpace or Google+? She ends by asking “do we even need it?”

The #UWSocial movement
Marciniak’s questions struck a chord with us. Our Twitter strategy, unchanged since 2008, fell short of our commitment to person-to-person interaction, and was also falling out of step with our university’s exploding interest in social media. Over the last few years, communications professionals from across our campus established the #UWSocial movement. Their goal was to help departments and programs establish rich social media relationships, aiming at the long-term goal of strengthening connections among faculty, students, administrators, alumni, prospective students, state legislators, and the public. Their experiments include @UWPowersMe, a @sweden-style account taken over by a new tweeter from the University of Wisconsin system each week, and UW Right Now, an amazing project that helped make the life of the public university visible by sharing thousands of stories and images from a single day. At the core of the #UWSocial idea is something every writing center values: powerful, one-to-one interactions between programs and students.

Bringing our center into the #UWSocial fold
To transition our Writing Center Twitter feed from its spouting-from-the-corner approach to a social, interactive presence, we convened a team of social media experts from our writing center staff. Jessie (@jesstype), Kevin, Kim, Leah, Nmachi and I read McKinney and Marciniak’s critiques, scrutinized the feeds of active writing centers, and then got together with #UWSocial Jedi master Alex Kowalsky (@a_kowalsky) to grill him about the rhetoric of 140-character messages. Alex counseled us to measure success not in follower counts or increased workshop attendance, though of course both of those numbers can be important, but on the basis of genuine interactions with students. He reassured us that students know their tweets are not private, and urged us to start conversations with them about their writing. He got us thinking about the multiple audiences any academic Twitter feed must satisfy, and about how to find the right ratio of informational tweets to fun tweets.

A necessary good
By studying how campus programs use Twitter to identify and support students who might not otherwise think about themselves as part of a community, our team agreed that Twitter was a necessary good if we wanted to support and engage with the culture of campus writers as they were sitting at their computers to write. Like any tutor-directed project, the coordinator in charge of the center account will rotate out every year, leaving a new coordinator to take over the management of the account while retaining something of the center’s original voice. To guide each year’s online coordinator, we negotiated our way to a position statement guiding our Writing Center’s use of Twitter, opening with a direct call to our mission statement: “Twitter gives the Center direct, one-on-one contact with students that is designed to support, encourage, and direct them as writers.” In the document, we establish a tweeting protocol by describing the center’s persona, listing the kinds of tweets appropriate for our mission, and showing examples of how an academic program can engage its community, peers, and students with professionalism and humor.

@uwwritingcenter’s adolescence
At four and a half years old, our Twitter feed counts as an internet teenager, and our tweets look a little more mature than they looked 5 years ago. Informational tweets about availability and workshops still predominate, but their tone has grown friendlier and more fluent in the language of Twitter:

The CCE is poppin tonight! As of 7:50pm on 5/6, though, there’s still one more spot. Come by and snag it! writing.wisc.edu/AboutUs/SerPla…

As of 7:27pm on Sunday, 5 May, Chadbourne has a few slots available. Please come by and make them yours! #uwwrites #writestong #studystrong — UW Writing Center (@uwwritingcenter) May 6, 2013

We are retweeting our tutors:

We are interacting with students who are tweeting about writing:

@michelleturner6 That’s awesome, Michelle! If there’s anything we can do to help you revise, give us a shout. #writestrong — UW Writing Center (@uwwritingcenter) May 6, 2013

We are showing pictures of what we do:

We have used Twitter to build strong relationships with departments, libraries, and other academic programs on our campus, and we have used it as an excuse to talk to other writing centers around the country.

Along the way, we have gained followers and attracted students to our workshops and appointments, but we have also done the more important work of establishing relationships with our students and colleagues by engaging in direct, supportive conversations about writing on our campus.

Building your Twitter strategy
We have been lucky to be part of a university with a lively social media presence, but writing centers at schools with smaller social media presences have also found a great deal of success. Brian Hotson, director of the Writing Centre at Saint Mary’s University in Halifax, @SMUWritCentre, has built one of the largest Twitter followings of any writing center in the world by becoming his campus’s clearinghouse for links related to writing.

If you are just starting with Twitter, a recent UWCbLing post by Mark Jacobs, Social Media Coordinator at the University Center for Writing-Based Learning at DePaul (@DePaulUCWbL), lays out strategies for establishing your social presence.

Once you have mastered the basics of Twitter, the next step is to develop a strategy that fits your campus, your budget, and your personality. Our experiences suggest a few different considerations:

At its best, Twitter gives writing centers privileged insight into how our students feel about writing, and makes it possible for us to intervene in moments when they are struggling as writers.

16 Replies to “The Social Center: Why Writing Centers Need Twitter”