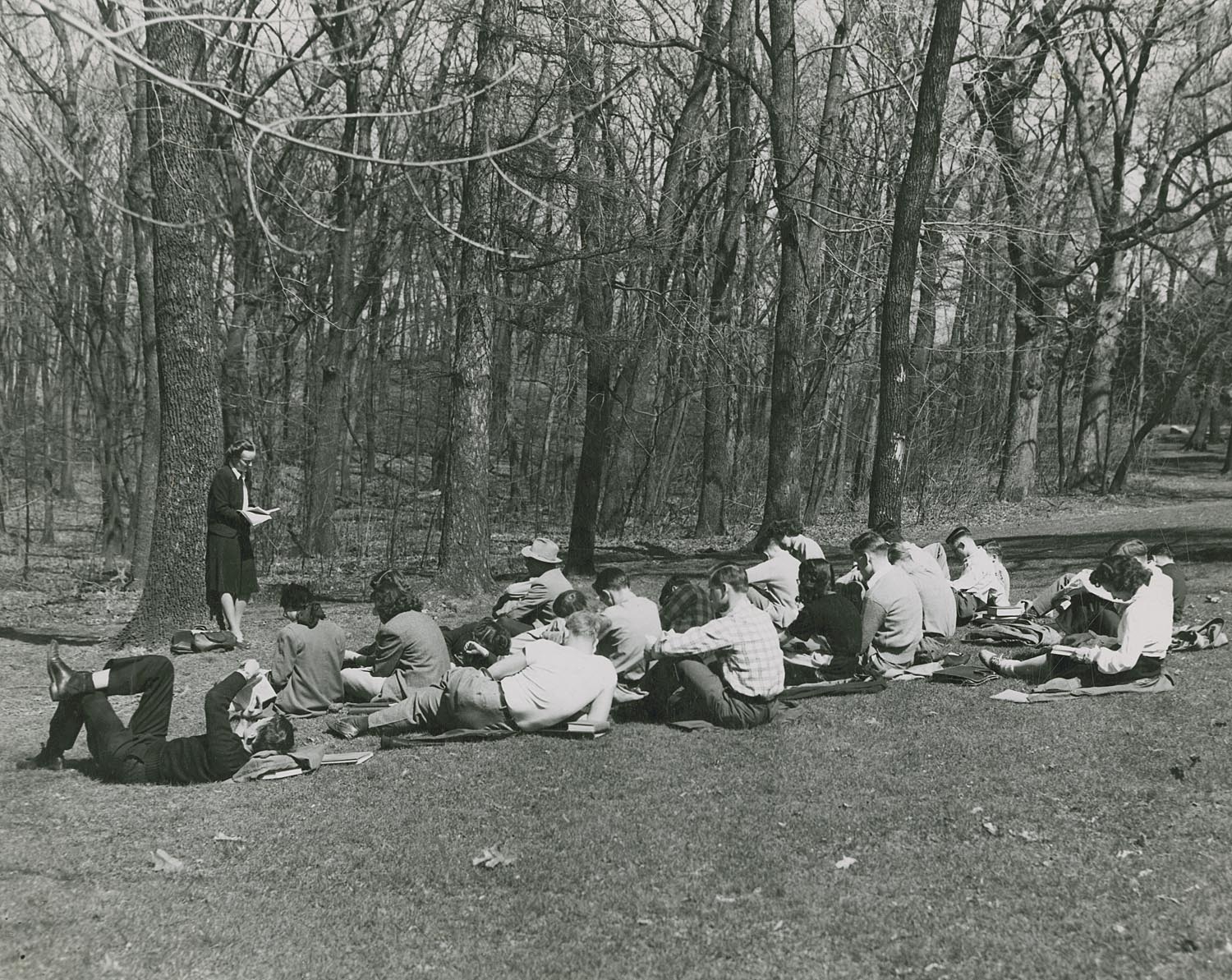 If you’re an avid reader of Another Word, you may recall a blog post by Brad Hughes—the Director of the Writing Center and the Director of Writing Across the Curriculum at the University of Wisconsin-Madison— honoring Professor Joyce Steward, founding director of the UW-Madison Writing Center in 1969 (then called the Writing Laboratory). In this post, I’d like to continue that tradition by honoring one of Joyce Steward’s mentors and colleagues in the UW-Madison English department: Professor Ednah Shepard Thomas, a pioneering writing program administrator who helped develop and direct UW-Madison’s Freshman English program from 1947-1970 and who contributed to the development of the Writing Laboratory.

I first learned about “Mrs. Thomas,” as Steward and most everyone called her, when I was a PhD candidate in UW-Madison’s Composition & Rhetoric program. In 2010, Brad invited interested students to contact him about collaborating on the publication of a memoir by a former UW-Madison faculty member. At this point, I had conducted initial dissertation research on the history of rhetorical education at UW-Madison. After meeting with Brad to discuss the project, I was excited to learn more about that history from a primary, and previously unavailable, document.

And what a primary document it was: over 400 typed (i.e., on a typewriter) manuscript pages, a tome of personal and professional history that described Thomas’s early life and schooling in the New England area; her coursework and teaching in UW-Madison’s English PhD program; her marriage and child-rearing in nearby Monona, WI, followed by an unexpected divorce and the challenge of raising three young children alone; her fortuitous return to teaching at UW-Madison, successfully administering Freshman English, and eventually earning—at age 65!—the title of Full Professor.

When I joined the project, Brad had already been collaborating with Professor Susan McLeod, a distinguished WAC scholar who met Mrs. Thomas while pursuing her PhD in UW-Madison’s English program, and Professor Mike Palmquist to publish the memoir as an open-access book through the WAC Clearinghouse. Over time, the scope of the project broadened to include the publication of additional relevant materials:

These materials and Mrs. Thomas’s memoir, which includes a foreword by Susan McLeod and an afterword by Professor David Fleming, author of the award-winning book From Form to Meaning: Freshman Composition and the Long Sixties, 1957-1974, have been published in the WAC Clearinghouse’s Perspectives on Writing series under the title “Two WPA Pioneers: Ednah Shepard Thomas and Joyce Steward.” We hope that publishing these materials will provide greater understanding of the work of writing program administration in the field’s pre-professional era (i.e., prior to the formation of the Council of Writing Program Administrators in 1979) and greater appreciation for those who pioneered in such work. Further, we see Mrs. Thomas’s memoir functioning as a local history of writing program administration in the mid-twentieth century which includes a vital counternarrative to Fleming’s account of the abolition of UW-Madison’s Freshman English program in 1969-1970.

I want to highlight some of Mrs. Thomas’s accomplishments that demonstrate her unique preparation for and pioneering contributions to teaching and administering college writing in the mid-twentieth century.

Mrs. Thomas graduated from Mt. Holyoke College in 1923 with a major in English composition (minor in English literature), which was intentional—she took all the composition courses she could. A primary reason she attended graduate school at Bryn Mawr was because the course catalog included a graduate course in creative writing. Unfortunately, the course was canceled due to low enrollment.

Atypical Interest in and Aptitude for Teaching Writing

When Mrs. Thomas enrolled in UW-Madison’s PhD program in English in 1925, her interest and talent in teaching English composition were recognized and rewarded with opportunities to teach additional sections in place of graduate work, which she gladly accepted. Although she excelled scholastically at Bryn Mawr and was the first student in the school’s history to earn the MA degree in one year, she had become somewhat disenchanted with the solitary pursuit of scholarship, whereas she genuinely enjoyed teaching writing.

Prior to Mrs. Thomas’s invitation to assist with the administration of Freshman English in 1947, the job had required little more than scheduling teaching assistants. However, Mrs. Thomas assumed responsibilities that are commonly associated with WPA work: training and supervising teaching assistants, developing curriculum, coordinating student placement, planning and implementing assessment, as well as advising students. She also institutionalized the practice of assigning grades not to individual papers but on work accomplished at designated moments in the semester, which resembled an early version of portfolio grading. And she instituted a teaching assistant training program where experienced teaching assistants were assigned to mentor novice teaching assistants. As enrollments increased dramatically in the years following World War II, Mrs. Thomas fulfilled these and other responsibilities successfully, leading to a highly effective and surprisingly stable program for nearly 20 years.

As an articulation of her approach to training teaching assistants, Mrs. Thomas published a pamphlet on responding to and evaluating student writing. First published in 1955, Evaluating Student Themes went through four printings and became an all-time bestseller at the University of Wisconsin Press, in part because of its popularity among high school English teachers. In the booklet, Mrs. Thomas asserts that a teacher’s purpose is to show interest in and respect for students’ ideas, to balance encouragement with criticism, and to promote students’ life-long writing skills. (Sounds similar to writing center pedagogy, doesn’t it?) The booklet also models marginal and terminal (end) comments on actual student themes of varying quality. One of Mrs. Thomas’s purposes in her training was to help teaching assistants see what students were actually saying, rather than correcting or rewriting students’ papers based on what the teaching assistants wanted to see in students’ writing. The principles and practices in the booklet, when paired with regular instructor conferences, reflected an emphasis on the role of feedback and revision, rather than correction, in promoting the development of students’ writing ability.

Influence and Involvement in the Writing Laboratory

In her oral history interview, Professor Joyce Steward recalled that Mrs. Thomas was involved in discussions with Freshman English faculty directors Edgar Lacy and William Lenehan about replacing Freshman English with a voluntary writing tutorial program. When Professor Steward was tasked with creating a writing lab, Mrs. Thomas accompanied her on visits to nearby writing centers, including the University of Iowa. Steward also acknowledged that Mrs. Thomas’s approach to writing instruction strongly influenced her (Steward’s) approach to training those who worked in the Writing Laboratory. And after her retirement, Mrs. Thomas volunteered in the Writing Lab on Tuesday mornings for several years, working with students on an individual basis as she had done with her students for so many years. While not the founder of the Writing Laboratory, Mrs. Thomas clearly influenced its development and its pedagogy.

Publishing Mrs. Thomas’s memoir is an effort to memorialize the life and accomplishments of a remarkable individual whose professional contributions, when viewed alongside her personal life, are all the more admirable: overcoming a crippling divorce and raising three young children alone in the early 1940s is highly admirable; but returning to academia and flourishing as a writing instructor and writing program administrator while continuing to fulfill domestic obligations is truly remarkable. It is no wonder that, reflecting on her life, Mrs. Thomas claimed to have had “the best of both worlds. I am a full professor (emeritus) of the University of Wisconsin, and the only woman professor to have three children and seven grandchildren.” I’m certain that both titles—professor and mother—were deeply meaningful to her and that she would want to be remembered as both.

I hope you’ll check out Mrs. Thomas’s (and Joyce Steward’s) materials on the WAC Clearinghouse and leave a comment here about what you learned. Or post an observation or a question about Mrs. Thomas that came up as you read this blog post. I’d love to hear your impressions. Thanks for reading!

Featured photo at the top of this blog post: Ednah Shepard Thomas teaching outside, probably near Muir Woods. Courtesy of the University of Wisconsin-Madison Archives (ID S17533).