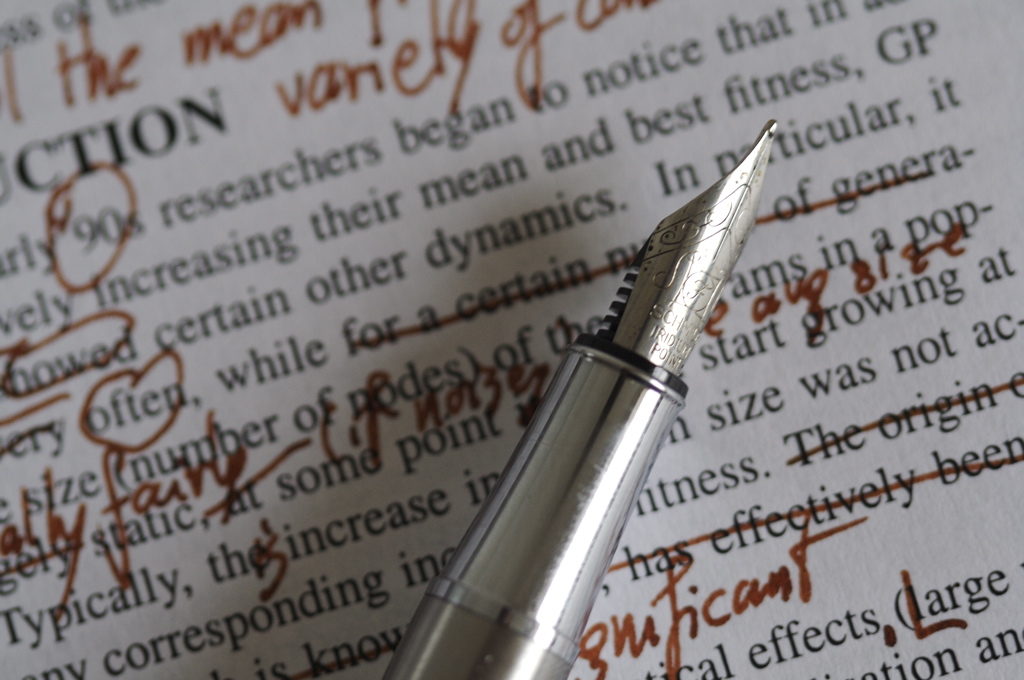 Ineffective and effective practices for commenting on student writing

By Mike A. Shapiro, @mikeshapiro, TA and Co-Coordinator in the Writing Center at the University of Wisconsin–Madison.

Those of us lucky enough to teach in a classroom or tutor in a writing center recognize how much learning can happen in a 30-minute conversation. Spending those same 30 minutes writing comments on a student’s paper can feel like we’re teaching only a fraction of what we’re capable of, and yet writing these comments is an enormous part of our work! A professor in a writing-intensive discipline may spend 300 workdays of her career grading papers, and a writing center may spend a large percentage of its tutoring time on written feedback.

But what do students learn from all these hours dedicated to commenting? Troublingly, the answer is that we don’t know.

C. H. Knoblauch and Lil Brannon have, for thirty years, followed research on teacher feedback. They believe commenters fall for the logical fallacy that what teachers teach is the same thing as what students learn, and they think we count as student learning things that are really just error correction. They conclude from the studies they reviewed that comments on student writing have “limited meaningful impact on draft-to-draft revision and virtually no demonstrable effect on performance from assignment to assignment” (2006, p. 14).

As Anson (2012) puts it, “What would it mean to us, psychologically and pedagogically, if we were to find only a modest educational return on the colossal investment of time and energy we put into responding to student writing?” (p. 188).

Yet, as I look over the research on commenting on student writing, I wonder whether this failure lies not with the comments themselves but with the metaphor through which we approach them.

Great teachers and tutors build talk into their work with students, inviting questions and interpreting student expressions to gauge whether more explanation is necessary. When we carry this interactive pedagogy onto the page we end up talking to a student who isn’t there.

But comments on student writing are not conversation. They are as much their own genre as a lab report or business memo, with reasonably well-researched guidelines for success. Rather than treat comments as a failed form of talk, why not ask what work we can do in our written feedback that we can’t do in any other way?

Is there such a thing as too many comments?

Students report that they like receiving lots of comments on their writing (Still & Koerber, 2010).

However, a paper covered with comments may demoralize students (Weaver, 2006), focus  attention on mechanical tweaks rather than thoughtful revisions (Straub, 1997; Ashwell, 2000), and treat students as editors rather than learners (Sommers, 2006).

To motivate learning and to help students recognize the crucial problems in their drafts, limit your comments to the small number of high-stakes problems which, if addressed, will elevate the student (and the draft) to the next level of competence.

These issues are not always going to be writing a stronger main claim or bringing better analysis to bear on the evidence, but beware shying away from difficult revision topics in favor of revisions that are easier to write about, like sentence or paragraph structure.

Because students are likely to revise only those problems raised in comments (Ferris, 1997; Ashwell, 2000), your selection of important lessons is one of the most important interventions you make.

Here’s an example comment, framing the problem in terms of the reader’s needs and suggesting a process for fixing it:

“You quote this source without relating its idea to your topic in this paragraph, and so your reader has to guess how this idea about smoking relates to your main point about health care. To help your reader understand your logic, revise the sentence before the quotation to introduce it as an example, and revise the two sentences after the quotation to explain how this example illustrates your main point.”

When do comments fail?

Bad handwriting, unexplained underlining, and arcane symbols confuse students, but the major problem is that commenters imagine their words mean the same thing to the student that they do to the commenter. In this regard, and in many others, bad commenting is exactly like bad writing.

Academic jargon that comes easily to instructors and tutors can be impossible for students to decode. For example, one study looked at students in a history course who received the comment that their essays required “more analysis”; of these students, only 51% could explain what analysis meant (Chanock, 2000).

While some instructors blame inattentive students for failing to master academic jargon (Bailey & Garner, 2010), the reality is that students lack the expertise they need to translate academic codes into revision practice. Comments that students can’t grasp quickly demotivate revision and lead students to feel they can’t improve as writers (Carless, 2006; Weaver, 2006).

Take great care to phrase your explanations and interventions in as little academic jargon as possible. For example:

Do students learn from praise?

Students say they want more praise in the written comments on their writing (Cho et al., 2006; Weaver, 2006), but research suggests that positive feedback is often ineffective:

Positive comments may be ineffective because praise is less text-specific than criticism (Ferris, 2014), and positive comments tend to appear at the beginning of a critique (Weaver, 2006). Consider the ubiquitous “This is a good idea, but…”

To use positive comments to instill your students with confidence that they can grow as writers, describe an essay’s strengths in as much detail as you describe its weaknesses:

How much time does it take to write good comments?

Hewett (2011) suggests that beginning writers are able to learn and execute only 2 writing tasks through written feedback. Ferris (1997) saw comments as short as 6–15 words lead to substantial revisions.

These findings may be at the low end of the scale, but it is possible within 20 minutes to identify 3–4 significant learning needs, and to craft interventions to fit each need.

One tool that may be required for faster commenting is a computer. While many instructors feel more comfortable reading hard copies, comments written on those copies come with a built-in incentive to be short and unclear. By typing your comments, you can use your commenting time to execute the two-step intervention process described above.

The instincts we hone in the classroom and writing center may lead us to compose written comments that cover more issues than students can reasonably address, in language we can’t modify as we see our students’ blank faces, without clear statements of the problem or processes for correction, and with praise that does not do the substantive work we want it to.

The best studies on this topic share the conviction that comments can teach students if certain conditions are met. By recognizing the comments we write as a genre quite different from classroom instruction, with its separate strategies and rhetorical needs, we come closer to that cheering correlation between student learning from comments and instructor expertise in writing them (Parr and Timperley, 2010). But be wary: Lee (2008) cautions that many teachers who know how to write good comments nonetheless succumb to institutional and professional pressures and end up taking more time to comment less effectively.

The last word on this topic belongs naturally to Nancy Sommers (2006), whose “Responding to Student Writing” (1982) in some important ways introduced this critical review, and whose more recent work leads her to conclude:

“After following four hundred students for four years, I [ . . . argue] that feedback plays a leading role in undergraduate writing development when, but only when, students and teachers create a partnership through feedback—a transaction in which teachers engage with their students by treating them as apprentice scholars, offering honest critique paired with instruction” (p. 250).

Because this is a blog post, not a peer-reviewed article, I refrained from commenting on the methods, analysis, and general persuasiveness of these studies. Many of them look at learning contexts that don’t match ours, and I fully appreciate that it is a great risk to assume that studies of high school English learners in Hong Kong apply to first-year composition students in Wisconsin. But if you are waiting for research that applies exactly to your teaching situation, you will be spend your entire career basing your teaching decisions off of lore, you’ll miss the genuine and significant research that can reveal how your students learn (Anson, 2012).