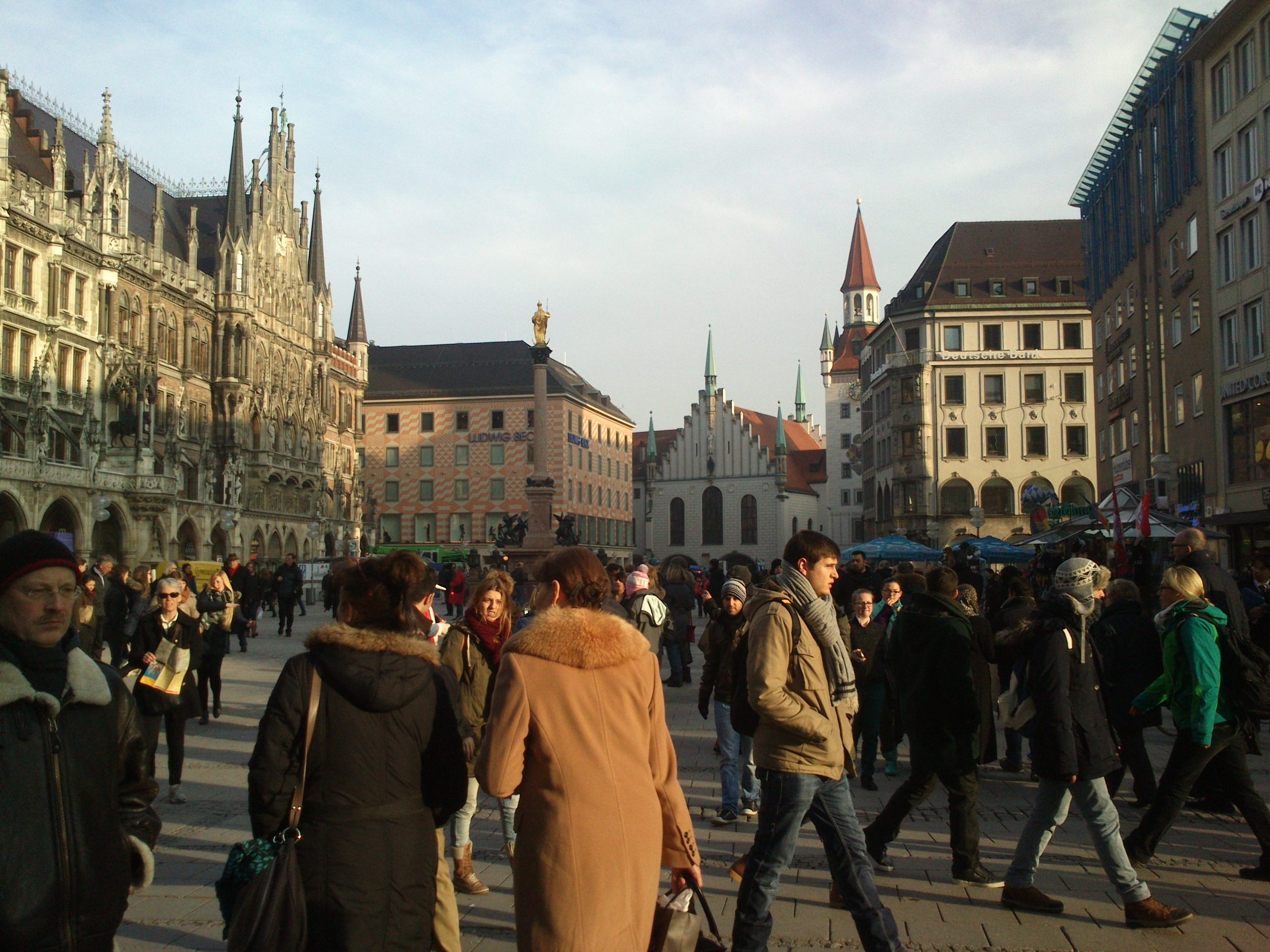 Writing centers can launch lives in new directions, across continents and oceans. The years I spent working at the Writing Center while in graduate school in Madison certainly set me on a path to my current work at the Rachel Carson Center for Environment and Society (RCC) in Munich, Germany. The RCC is an interdisciplinary, international center for research in environmental history and allied fields that aims to raise the profile of this work in public discussions of environmental issues, in the spirit of our namesake, the influential author of Silent Spring. The project is exceptional in many ways–one being that its directors, Christof Mauch and Helmuth Trischler, represent Munich’s oldest public university (LMU Munich) and the research division of the Deutsches Museum, respectively. For the last year I have served as Director of Academic Programs; I support the center’s research fellows, develop collaborations in environmental humanities with other centers, and teach in our international environmental studies program, among other things.

My graduate training in U.S. environmental literature and history and the vision of people at the Center for Culture, History, and Environment put the Carson Center on my mental map back in 2009. Yet a surprising number of the skills that I use in daily work I developed at the Writing Center at University of Wisconsin-Madison. These range from the mundane but important (how to keep good records, documentation and reporting practices) to the more profound (how to gain cross-disciplinary, cross-cultural rhetorical competence, and retrieve and contextualize disparate content knowledge). Learning alongside the student writers whom I tutored at the center taught the practical consequences of how epistemological framings operate within disciplines. It also brought home how writing works as a searching, shared activity. Above all, the Writing Center taught me to apply interdisciplinary perspectives to real-world problems and reinforced a sense of why literacy is vital for addressing global environmental change.

Before I walked into the Writing Center in Helen C. White Hall, I knew very little about ideas of writing centers and nothing about what could be learned there. As an undergraduate in Charlottesville, Virginia, I would have blushed to be caught near a place where students were learning to improve their writing. I held one of the most common misconceptions about writing centers—that these are places where students go for remedial instruction.

This misguided notion dissolved over the course of one long conversation in the spring of 2003 with a fellow graduate student who had taught at the Madison Writing Center for several years.

I went to talk with Brad Hughes, the long-term Director of the Writing Center at Madison, based on glowing recommendations from several other graduate students. They raved about the training and camaraderie in teaching, and the ethos of the center that converted many graduate cohorts in Madison (not just in the English department, but in history, geography, and the natural sciences) to the value of writing for multiple audiences and learning through structured dialog. At the time I was teaching first-year composition. What I learned in the Writing Center’s training became relevant beyond the classroom and extended into understanding better how the university works, how disciplines are organized and too often fragmented, and how student careers are often shaped by anxious scenes of composition.

How do you listen to a writer’s questions about the purpose of an assignment in a subject you have never studied, for a department you’ve never visited? We learned to listen for nuance and context, to reflect questions, to ask further questions to stimulate, we hoped, reflection and not further confusion about an intended audience. How do you help a writer in a field quite distant from your own—say, Nuclear Engineering—negotiate unspoken conventions of writing at the graduate level in his field? Particularly if you at times find some of those conventions stifling, humorous, or even blind to ethical concerns?

We learned to draw out the author’s sense of logical structure and argument, seeking at first to understand rather than judge, but also holding up a mirror to larger or even unintended implications of their ideas.

Such work encouraged me to do more serious interdisciplinary reading in anthropology, critical geography, and environmental history. The more time I spent learning with future engineers, accountants, and nurses, the more certain I felt that literary criticism, too, must produce practical wisdom, not just clever wordstrings.

Empathy and Learning across the Disciplines

In the first two years that I taught at the Writing Center, I cared deeply about these questions of audience and disciplinarity and faced them with each new meeting. I experienced a real tension around how much of myself to invest in those meetings. It was hardest with ongoing appointments, sometimes with graduate students in other programs where perhaps there was less support to spend time on writing but no less pressure to do it well. I remember feeling drained after sessions with students who seemed blocked to doing their best work because of intense anxieties over how their work would be received by an instructor or thesis advisor.

One idea of a writing center is as the campus ICU for compositions in critical condition or students just shy of a panic attack. I experienced this with a few students who came satellite campus library center, in their hour (or sometimes half hour) of need before a deadline.

What did we say then? We emphasized that we did not promise an A. We said we could not perform miracles, that we were not an editing service, that we would not write the paper for you. We would have a patient and detailed conversation, driven by the writer’s concerns and tempered by our own experiences as writers and teachers, at the end of which both parties would leave with a different outlook and a different text. There is something magical in hearing one’s words reshaped in conversation with a stranger. Students said, “but I meant to say…” and then they said it better.

Our idea of a writing center was as a campus learning center where it was safe to play with language, where everyone who came in the door could find an attentive listener. One part composition theory, one part educational therapy. It worked both ways. I came to question what mattered most to me in my own writing–what universities are for, what kinds of critique matter, what for me became questions of justice and environmental groundwork–through listening to how others negotiated their own values and goals. If they form the place on campus where the most uncertainties are entertained, new ideas tested, and clearer phrases formed, perhaps it is because writing centers are where real multidisciplinary conversations happen every day of the semester.

The program that has become Madison Writing Assistance (MWA) started in South Madison at the public library while I was finishing my degree. Brad Hughes generously invited me to work there on Saturday mornings as part of my teaching contract. The MWA program continued a tradition of store-front writing centers where anyone looking for writing help could walk in and sign up for an appointment. The Madison program was the brain child of then-Associate Director Melissa Tedrowe and an energetic librarian, Chris Wagner, in South Madison, initially funded by a local university grant.

At the mobile writing center within the public library on South Park Street on Saturday mornings, I met with veterans writing memoirs, returning adult students writing for community college credits, local Hmong high school students, and people of all ages and backgrounds seeking work. I worked with many people on reformatting or typing up hand-written resumes, writing professional cover letters, and navigating electronic job applications. MWA taught humbling lessons about the limits of academic English.

During my daily commute on the Munich U-Bahn, I see signs advertising “Wall Street English,” which captures the ambivalence of contemporary (U.S.) English in the world. No one ultimately owns the full powers of any language, least of all cosmopolitan, contemporary English. The MWA program lowered barriers of entrance to the costlier games of academic and professional writing. But it also strengthened concerns I had about problems of livelihood, sustainability and the abuse of language by powerful interests. It influenced me to get involved in campus outreach, pay more attention to social inequities, and trust myself more as a citizen as well as a teacher. Standing up and engaging people with power is something most of us have to learn how to do—including rather shy and sometimes sheltered academics.

One last idea of writing centers is one rooted in the concept of great public universities. In Wisconsin, we called it the Wisconsin Idea, that the borders of the university extend to the state’s borders and our ideas ought to serve all the people, not just some of the people. In Virginia as an undergraduate, we called the university an “academic village,” a community both cosmopolitan and intimate. I have encountered similar ideas operating in universities in Sweden, Germany, and Japan, and they exist elsewhere. There are to be no unnecessary or unquestioned borders perpetuated by these universities—perhaps least of all now between disciplines in a time of global ecological degradation and savage economic disparity. The worst abuse of language is to “divide and conquer” by it.

If education is a vital public service in a democracy, then one of the goals of higher education has to be to learn to wield language as a political tool, responsibly and equitably. I am convinced that we learn this through dialog in conditions of care and commitment to common goals.

And this is where writing centers can and sometimes do serve as a campus forum, not for grandstanding or vote-getting, but for questioning principles, duties, and final ends. In a truly good writing center, writers from all the sciences, including the interpretive and aesthetic, as well as natural and social, challenge each other daily to demonstrate the worth of their findings in a context wider than internal, disciplinary validation. So a good writing center, it turns out, provides a prototype for the kind of interdisciplinary, problem-focused centers we need to address the so-called “wicked” or complex problems of poverty, disease, and climate. These include institutes for Environment and Society, for Public Health, for Digital Democracy, and many other international centers for synthesis that are redefining the meaning of socially-responsible universities.