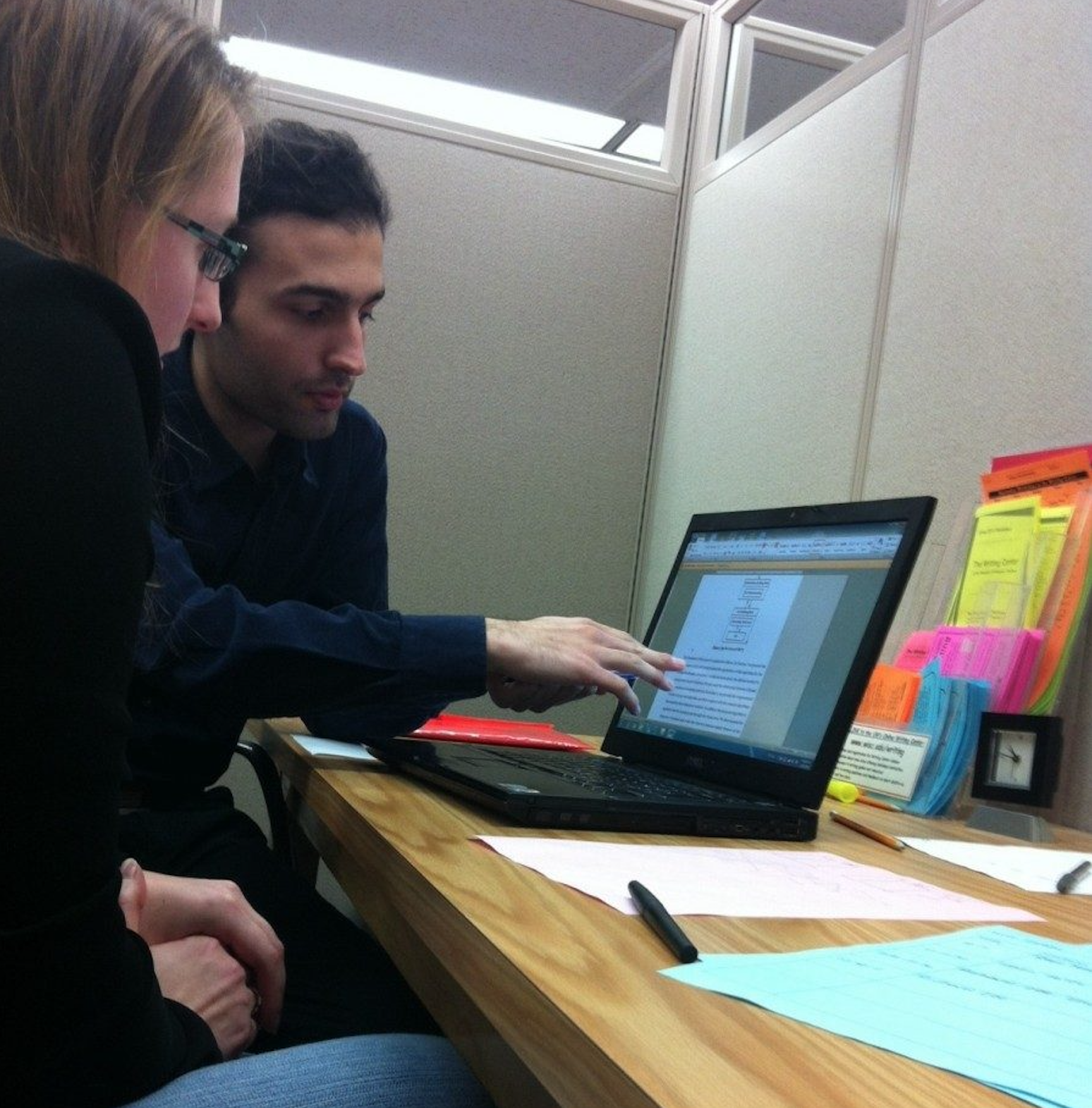 Leah Misemer is a graduate student in English Literature at the University of Wisconsin-Madison and the TA Coordinator of the Online Writing Center there.  While her dissertation is on serial commercial comics, she is also interested in media specificity and technology in writing centers.  This is her sixth semester working as an instructor at the UW-Madison Writing Center.

When I first trained as a peer tutor at Washington University in St. Louis, I was trained to look at paper drafts.  During my first shift as a Writing Center instructor at University of Wisconsin-Madison, a student brought in a draft on a laptop.  I was a bit flummoxed about what to do.  While it was great for the writer to be able to make changes to the draft during the session, it felt less collaborative than sessions with paper drafts.  I had to ask the student to scroll down and up because I didn’t want to touch her expensive electronic equipment, and this felt awkward, like I was shut out of the draft in some way.

This is my sixth semester on staff at UW-Madison and I continue to have a moment of irrational anxiety every time I see a student pull out a laptop during an appointment.  This is not to say I don’t have productive appointments with students toting laptops; when I can get students to cut and paste large sections of a draft, the computer facilitates actual draft work the student can take home.  But appointments with laptops aren’t all like that.  Laptops are inherently designed to be one person tools with small screens and keyboards that don’t promote sharing. Part of my anxiety stems from the pitfall with computers where students can have a tendency to sit and edit every sentence, trying to make it perfect before you can move on.  In these appointments, the student views the instructor as the expert, and collaboration can be difficult to encourage.  The other pitfall, which can be related, is that it is difficult to get a sense of the whole draft when you have to scroll through the draft, and especially when you have to ask the student’s permission to do so.

While it may seem odd for an Online Writing Center Coordinator to have anxieties about laptops this far into a digital age where everyone has laptops, the conversation relates to how the use of space in the writing center signifies a distribution of power in an appointment.  Laptops aren’t going away, so it behooves us as instructors to consider how we can avoid the pitfalls of appointments with computers and the power imbalances they encourage.  Writing center sessions using technology can be

collaborative; that collaboration just happens in a different way than sessions where the draft is on paper.  In this post, I will discuss some recent experiences I have had with drafts on laptops during my time as an instructor at the UW-Madison Writing Center, one where the laptop was a hindrance and we established a more collaborative atmosphere with a paper draft and one where we figured out how to include the laptop in our collaborative space.  Throughout, I point to advantages and disadvantages of different spatial configurations and strategies.  Towards the end, I make some suggestions about how to use space most effectively for appointments where the student brings in a draft on a computer.

One student I had was a returning college student working on finishing a paper that she planned to use as her writing sample to apply to graduate school in education.  We worked together over the course of the semester primarily on organization of the piece.  At the beginning, she would bring only her laptop to the session and make notes on the draft, sometimes cutting and pasting to a document for scraps when we found information that didn’t fit her larger paper.  At the end of each session, she would take some notes in a notebook she had about what she should do for the following session and at the beginning of the next session, we would revisit those notes.  The paper was quite long (30ish pages), and we frequently ran into problems related to me not being able to get a sense of the whole draft. I would ask a question, she would spend some time incorporating the answer to that question in the section we were currently working on, and then later I would find out that she had answered the question in a different section and probably could have cut and pasted the language rather than composing anew.

This issue highlights how this student saw me as holding the power: if I asked a question, she felt she needed to answer it right there, regardless of whether or not she had answered it elsewhere in the document.  The situation also shows how the seeming advantage of being able to get writing on the draft done during the appointment can turn into a session where the student stresses over every word of every sentence, checking with the instructor to see if each sentence is “correct,” another situation in which the student views the instructor as holding the power.

We overcame this power imbalance and had one more collaborative appointment during our time together. For that appointment, the student printed out the section of the draft she wanted to work on and made notes in the margins based on our conversation. I remember her drawing a lot of arrows that day to indicate reorganization, and she didn’t have to use the extra notebook to jot down what she wanted to work on for the next week.  While I still didn’t get a sense of the whole piece because she had only printed out a portion, there was something about the permanence of the language on the page that helped her have more agency during that appointment.

A few weeks ago, I had an appointment that opened up some new possibilities for working collaboratively with drafts on laptops.  Reza was a multilingual writer and visiting scholar in Industrial Engineering working on article revisions.  Both times he brought his draft on his laptop, which was helpful because we were able to look at some other articles as models during the appointment.  What was different about my time with Reza than my time with the student I mention above was that Reza kept a pad of paper on his side of the computer, while we kept a piece of scratch paper that both of us used on my side of the computer, like this: Even though we looked at the draft on the computer, he changed very little there, but instead wrote notes on his piece of paper about our conversations, sometimes in Arabic and sometimes in English.  This piece of paper also included some of the English phrases I used to describe various aspects of what he was talking about.  On the piece of scratch paper on my side of the computer, he drew diagrams to explain the concept he was discussing (For more on the importance of using visual aids during Writing Center appointments, see Jesse Reeder’s post, “Visualization: What is it Good For?”).

This appointment felt more collaborative than my time with the education student because Reza, possibly because he was writing my suggestions down rather than immediately trying to incorporate them, thought critically about my comments and suggestions.  The shared space of the scratch paper on my side of the computer gave him the chance to be the authority on his subject, while the paper on his side represented my authority.  If you look at the image that starts this post, you can see that our body language—leaning in towards one another—suggests engagement and collaboration.

While instructors have no control over how students bring in their drafts, there are ways to encourage collaboration in appointments with laptops.  Here are some of the strategies I have developed in researching this blog post:

What methods do you use to encourage collaboration in appointments with a laptop?  How do you create a space that includes a computer where power is shared rather than held by the instructor alone?

14 Replies to “Sharing the Space: Collaborating in Sessions with Laptops”