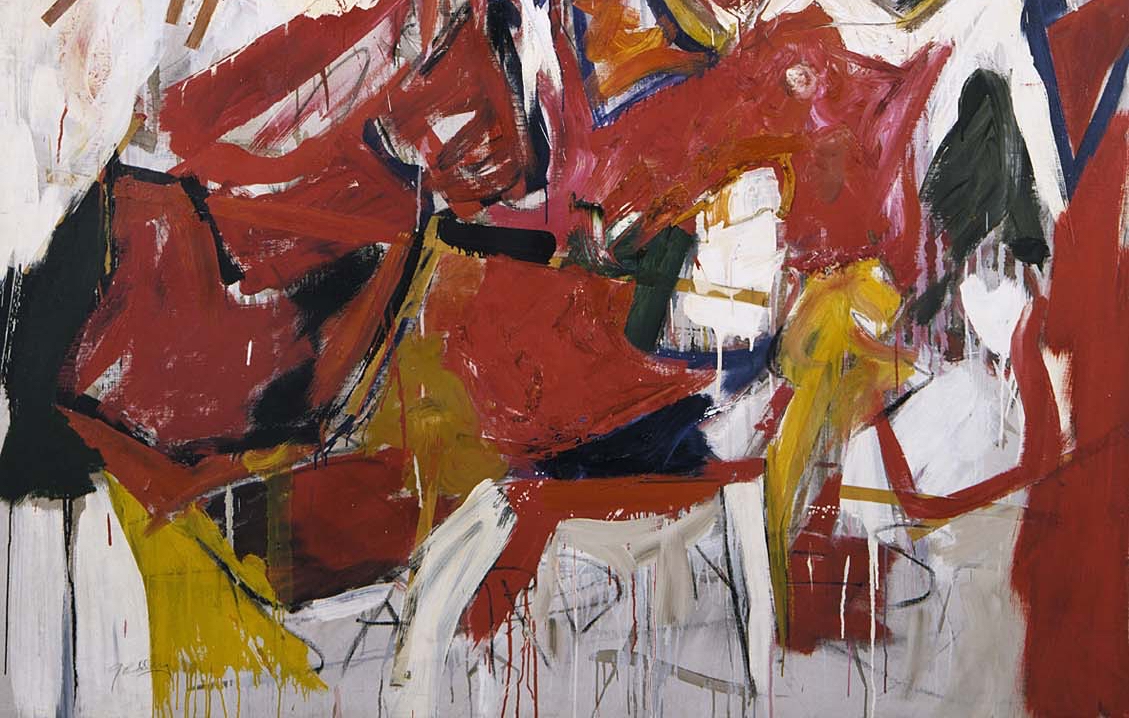 In “Why I Am Not a Painter,” a famous ekphrastic poem by Frank O’Hara, the poet recalls drinking a few beers with the expressionist painter Michael Goldberg. As they drink, he watches Goldberg create a painting inspired by the word “sardines.” When the painting is finished, O’Hara observes that no sardines appear anywhere on the canvas. He goes home and writes a poem inspired by the color orange. The word “orange” does not appear anywhere in the

As a graduate student in Literary Studies, I spend most of my time tinkering around with words, but I am also an

amateur visual artist. Consequently, I sometimes think about “Why I Am Not a Painter” when I meet with the many talented art students who visit the Writing Center. As they tell me about their art, I tend to feel a mixture of amazement, puzzlement, jealousy, and inspiration. Their orientation toward their studies just seems so different from my own. These feelings are, I think, not unnatural, but integral to Writing Center work. Somewhat like the encounter between the poet and the painter that O’Hara depicts, Writing Center work involves crossing genres, media, and disciplines. These crossings—in which we must leave our “comfort zones”—ideally spark dialogues that invigorate the creative processes of both: writer and tutor, poet and painter.

The practice of ekphrasis rests on similar assumptions. From the Greek ἔκϕρασις, “ekphrasis” refers to the description of a work of visual art in a literary form. Ekphrastic writing asserts that there’s something to be gained from thinking across disparate forms, from putting words to that which seems to resist them.

Description in the Writing Center

It occurs to me that a significant portion of Writing Center tutoring is, like ekphrasis, based in a practice of description, of speaking toward something. As writers, we try to find words for things that do not yet exist in language. To find these words, we often begin by describing what we think we “see”: whether it’s what we notice in a work of art—a painting, a poem, a novel—or what we notice in our research. We look for links, patterns, particulars, shapes, and gaps. And then we attempt to describe them.

It’s easy for these moments of description to start to feel routine. However, I find in my own experiences visiting the Writing Center that they are, in fact, extremely productive. In describing my writing and my writing process, I begin to articulate ideas that I only half-understood before someone asked me to talk about them. In this way, description can provide us with a starting point for the writing process, particularly when we’re trying to speak across gaps—between hunch and idea, between writer and tutor, between one discipline and another.

One reason I like “description” is that it feels unintimidating in comparison to terms like “analysis,” “critique,” or “argument.” As a Writing Center tutor, I can ask writers to describe their work, and they will usually answer with confidence, rattling off the plot of Oryx and Crake or the parts of a hydraulic motor. In contrast, when I ask writers to analyze, critique, or argue, they become much more likely to hesitate. We are told that these latter terms require more complex thinking, and that pushing students toward these higher orders is important, particularly at the university level. On Bloom’s taxonomy of educational objectives, analysis, critique, and argument are typically found toward the top of the pyramid, while description falls near the bottom (see figure).

And yet, even the process of creation, a cognitive domain usually placed at the very top, can start with something as simple as “sardines.” Ekphrastic writing is based on the premise that description does not merely create a copy of the original, but enlivens what it observes, making something new in the process. In attempting to describe something, we come to see it more clearly—or even to see it afresh.

But can the writing we produce in universities ever be understood as itself descriptive? The anthropologist Clifford Geertz notes that description can assume a variety of shapes, densities, and textures, not only in a poem or story, but in scholarly writing. Geertz coins the term “thick description” to refer to a descriptive mode that acknowledges how signs are interwoven within larger systems of signs. For example, a wink might be described simply as the closing and opening of a single eye. However, this thin description cannot fully convey a wink’s social and cultural meanings. Rather, an anthropologist’s description of a wink must place it within “a stratified hierarchy of meaningful structure in terms of which twitches, winks, fake-winks, parodies, rehearsals of parodies are produced, perceived, and interpreted” (7). In other words, we need to understand the context within which that wink occurs—its coordinates in space and time and its relationship to other signs that might not be immediately visible.

More recently, in my own discipline of literary studies, scholars have likewise been debating the value of descriptive methods. The “descriptive turn” calls attention to the surface of the text, refuting the idea that literary criticism must work to uncover hidden ideologies. Many of these debates draw from the work of the sociologist Bruno Latour, who writes that scholarship should seek “to describe, to be attentive to the concrete state of affairs, to find the uniquely adequate account of a given situation” (144). Unlike Geertz, Latour wants to do away with context altogether. For him, boxing an object of analysis into a given context is simply “a way of stopping the description when you are tired or too lazy to go on” (148). However, whether we see description as an end in itself, or just one of many modes that writers might assume, description can be a helpful place to start.

Description and the Artist’s Statement

The importance of description to Writing Center tutoring became particularly apparent to me when I began working with visual artists. An M.F.A. student in 4D Media came in for an appointment one day and asked for help writing her artist’s statement. She pulled a pile of crumpled papers out of her backpack. On them were sketches and photographs of her work. She had designed a series of tents. Each tent opened up into a magical, surreal world. In one, everything was covered in pink faux fur. In another, everything assumed a polished, white surface.

“I don’t like writing,” she admitted. She explained that words did not come naturally to her and that she communicated better in material language. This was part of what had drawn her to art in the first place. Now she was being required to produce a piece of writing that would force the multisensory dimensions of her chosen media into a language that simply didn’t fit.

I could see where she was coming from. The artist’s statement can be a difficult genre. It carries many of the burdens of the personal statement—for example, the awkwardness of self-presentation—with additional challenges specific to writing about art. Not only do words fail to perfectly convey images, but we often assume that art should “speak for itself.” Then, paradoxically, we ask the artist to explain it to us.

After the session, I researched the advice typically dispensed about artist’s statements. Mostly, I came up with a long list of don’ts: Don’t sound grandiose. Don’t resort to clichés. Don’t compare yourself to other artists. Don’t quote Deleuze. Don’t use “International Art English” (Rule). (The art world’s own distinct version of academic jargon that favors words like “aporia” and “traverse.”) While these don’ts offer a useful caution against pretentiousness, I could see why they might be paralyzing. An art student might be left wondering, “What can an artist’s statement do?”

Well, several things. On a practical level, the artist’s statement serves largely unavoidable institutional interests. Schools, galleries, museums, residencies, awards, and other institutions all require artists to write about their art. However, as a museumgoer, I might also add that I enjoy reading artist’s statements, and I find that they in no way detract from the aesthetic pleasure I take in viewing the art itself. Institutional imperatives aside, contemporary art has moved toward an aesthetic in which we now expect artist’s statements to serve as complements to art—for better or worse. So, instead of getting caught up in don’ts, we might note that, at its most basic level, the genre asks artists to begin by describing. This “thick description” ideally enriches and expands our understanding of how works of art take shape within larger contexts.

Consequently, Sarah Eldridge, a professor at Carnegie Mellon University, teaches her M.F.A. students to reframe the “artist’s statement” as an “art statement” (Garrett-Petts). Intentionality is bracketed off (“what did I try to do?”) and replaced with a practice of attentive observation (“what do I see?”). Instead of interpreting or analyzing the art, the artist looks at it again and describes it.

In my own limited experience, I’ve found that working with artists at the Writing Center has stretched my tutoring methods. For example, I love how artists draw as they describe their work to me, even when I haven’t explicitly asked them to do this. They’ll often stop mid-sentence and pull out a pencil and sketchbook. (Engineering students do this, too.) Whenever this happens, I’m forced to realize that I tend to privilege talk-based strategies. The need of artists to draw will remind me that there are other possibilities: outlining, diagramming, rereading, researching, free writing, and so forth.

An M.F.A. student once showed up to one of our ongoing sessions with a magazine she had designed. She wanted to create an insert that would offer readers suggestions for alterative uses to which the magazine could be put. The magazine was not only meant to be read, but flipped, cut, pasted, folded, and reworked. As she described all of this to me, I came to see that my fallback Writing Center tutoring strategies were inadequate to her particular task. But there was also something exciting about encountering a problem unlike any I’d seen before. When I went home to write that evening, I saw my own work a little differently, too.

Finally, please share your thoughts in the comments. How do you use “description” in your writing and tutoring practices? Have you tutored writers working on artist’s statements? What are the affordances and challenges of this genre? What methods do you think work best for tutoring artists?

Latour, Bruno. Reassembling the Social: An Introduction to Actor-Network-Theory. Oxford UP, 2005.

8 Replies to “Orange and Sardines: Art and Ekphrasis in the Writing Center”