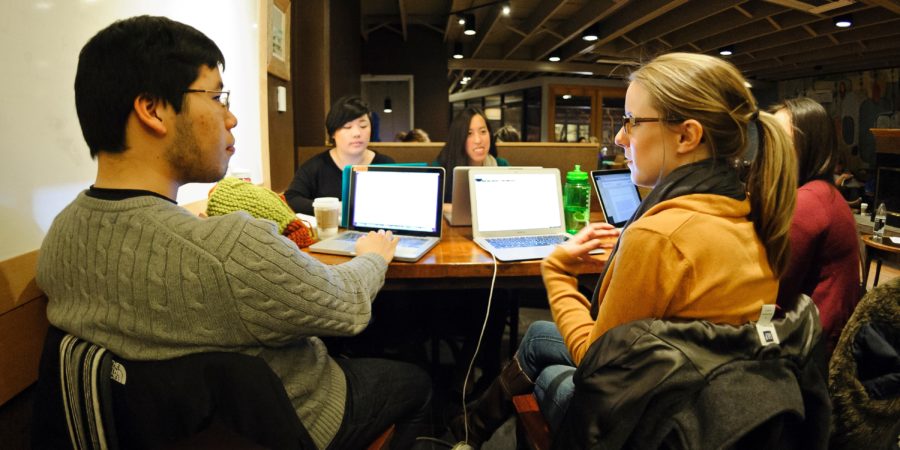 This post is a reflection on one of the Writing Center’s many new initiatives this year. Beginning last summer, we have been piloting a new format for our ongoing appointments—what we are calling “writing mentorships.” It is the aim of this post to provide a bit of background on the practices that these writing mentorships have grown out of, describe what writing mentorships look like, and share the trajectory of the mentorship program in response to feedback collected at the end of the fall semester.

Part of my job as the Writing Center’s TA Assistant Director for the 2019-2020 school year has involved coordinating and gathering data about our mentorships this semester. However, I have stepped into this role after a lot of the hard work that got the mentorship program off the ground. Consequently, I want to acknowledge the work of Mia Alafaireet, Jen Fandel, Lisa Marvel Johnson, Nancy Linh Karls, and Antonio Tang, who initiated the program I have been lucky enough to continue.

Ongoing support for writers working on long projects has been a cornerstone of the Writing Center for many years. The structure of repeated appointments with the same TA alleviates the writer’s need to introduce a project repeatedly, which provides more time for instructor-student discussion. Additionally, TAs’ appointments include paid time for reading an ongoing student’s writing outside of their scheduled time in the Writing Center, and this allows for more appointment time to talk about writing.

In previous years, ongoing writing support developed organically. A TA might mention that they could offer writing support over multiple weeks if a student was working on a longer assignment. A student might also keep scheduling appointments with the same instructor. Once both the TA and the student writer came to understand the work as ongoing, the tutor would add the student’s name to a handwritten list kept at the receptionists’ desk in our main center. In practice, this list could enforce the Writing Center’s expectations about numbers of ongoing students: a TA was limited to one ongoing student per regularly scheduled shift in our main center. This limit kept appointment slots open for students who were not looking for ongoing support and prevented TAs from becoming overwhelmed with reading their ongoing students’ writing before appointments.

As implemented, this system allowed the Writing Center’s TAs to support countless student writers over the years. Unfortunately, this number of student writers is “countless” because the system did not keep count. The handwritten lists were not effectively preserved beyond the end of each semester, and the lists were often inaccurate. TAs did not always update the list if their ongoing student stopped making appointments, and many TAs had extra “unofficial” ongoing students because those students could make their own appointments with the same TA week after week. This potential for inaccuracy in our only documentation for ongoing appointments was not surprising because that document was neither used nor saved—what motivation for accuracy could be cultivated for a document so ephemeral?

Last summer, we decided to try something different. Ongoing appointments were rebranded and restructured as writing mentorships, and this change offered new avenues for monitoring and support.

What Are Writing Mentorships?

The majority of the differences between mentorships and the old ongoing model happen on the administrative side. Whereas TA-student pairings used to occur through conversations between the TA and the student, now students interested in a writing mentorship could apply via a survey conducted with Google Forms. The survey was available on the Writing Center’s website, receptionists shared it, and a handful of students and TAs contacted me directly to request a survey link. In the fall, the survey’s primary purpose was to gather scheduling information. While students did share descriptions of the projects they were working on and their goals, the administrative challenge involved finding a TA who was available when the student needed support and who had a mentoring slot still open. I shared the surveys from students who identified Skype as their ideal mode for the mentorship with another Writing Center TA who then coordinated the Skype mentorships.

Once I made a pairing, I confirmed the times with the student, scheduled the appointments out for the semester (up to 10 hours total), and introduced the student and the TA to the mentorship pairing. This introduction included some expectation-setting. I suggested that the TA and student devote 30 minutes of their first appointment to goal-setting for the semester, and I promised that I would check in partway through the semester and again at the end of the semester to see if there were any challenges that I could address. The TAs were already well-versed in ongoing writing support, so many experienced this new coordination as additional communication about a process that already felt quite familiar. Skype mentorships were confirmed in a similar way, but the workflow for scheduling the appointments was a little different because our Skype appointments normally open just before an instructor’s shift begins, as do our in-person drop-in appointments.

As the semester went on, I checked in with nearly all of the pairs after four weeks (the exceptions were the three pairings I made from the waitlist close enough to the end of the semester that I decided to wait for the final check in). A few TAs and students reached out to me individually with scheduling problems or other concerns. At the end of the semester, I emailed all of the students and TAs in mentorships to gather feedback about what progress the pairs had made, what they found effective about the mentorship program, and what changes they might suggest for spring semester.

When we piloted mentorships in the summer of 2019, twenty-four students signed up. After an initial, goal-setting appointment with their mentor, these mentees had weekly hour or half-hour appointments throughout the summer. Ten returned in the fall semester. Including these students, fifty-three began or continued mentorships in the fall, and seven of these pairings used Skype to meet rather than meeting face-to-face. By mid-October, all of our available mentorship slots were full. Interest continued, and a waitlist quickly ballooned to nearly thirty students. Nearly all of the students who started mentorships in the fall finished the semester still meeting with their mentor.

Of the students who responded to the final survey and agreed that I could use their feedback anonymously for this post, most were graduate students who were working on dissertation chapters. Most described their progress over the semester positively: they finished chapter drafts, submitted grant proposals, and made progress on organization and drafting. In describing the strengths of the mentorship program, student comments fell mostly into two camps: (1) they appreciated the structure of regular meetings to check in on their work which were sometimes coupled with conversations about strategies for working on longer projects or (2) they valued that their mentors could pay careful attention to large amounts of their writing. For possible future improvements, the most common comment was a request to work with the same mentor in the spring. Other comments included ideas for supporting students sharing their writing with their TAs between appointments.

Of the TAs who responded to the final survey and agreed that I could use their feedback anonymously for this post, most described that their mentee had made progress, although two TAs explained that they had difficulty measuring that progress because their student had been working on numerous projects over the weeks. The TA-identified strengths of the program echoed those of the students. TAs valued the structure of regular appointments and their own growth of knowledge on their mentees’ work after reading so much of their writing. When thinking ahead to the spring semester, TAs’ most common request was better communication about when a mentee was going to miss an appointment. I had requested that mentees make scheduling changes through me so that I could keep eyes on their appointments, and I did not always communicate those changes with TAs beyond the changes to the schedule. One TA requested that I describe what students were working on before their first mentorship appointment, and I felt quite foolish for not thinking to have done this in the fall.

As the Writing Center prepares for the spring semester, the mentorship program must contend with two major concerns: (1) how can the Writing Center’s staff of TAs contend with the demand for mentorships, and (2) how can the mentorship program better enable student and TA communication regarding writing expectations between and during appointments? In order to begin meeting these concerns, we will be revising what is currently a monolithic model for thinking about what ongoing appointments look like. Rather than assuming that all students will be best supported through weekly hour-long appointments, we will instead ask better questions in the initial, coordinating stages to understand what kind of help best matches a student’s project and writing process. By offering a menu of mentorship structures, including more frequent meetings for students who are looking for close attention to a lot of text and shorter or less frequent meetings for students looking for a regular structure to support large and nebulous-feeling projects, our hope is that we can say yes to more students interested in mentorships. Additionally, we will be crafting better procedures for communicating between students and TAs, with and without an administrative go-between.

Want a Mentorship in the Spring?

If you are interested in receiving notification when our spring mentorship application opens, send me an email: avieth@wisc.edu. I am happy to answer specific questions by email as well.