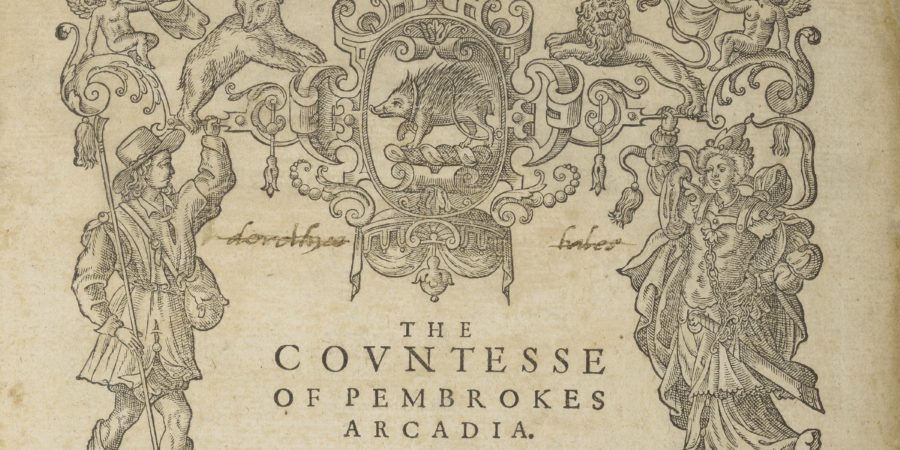 When Sir Philip Sidney sent the manuscript of his prose romance, the Arcadia, to his sister, Mary Sidney Herbert, Countess of Pembroke, sometime in the 1580s, he sent a letter along as well. Apologizing for the imperfections of his tale, Sidney tells Pembroke in his letter that the Arcadia was written for her, and he reminds her that much of it was even written in her presence.

Sidney writes that he’s inclined to sweep away his manuscript “like the spider’s web” or to “cast [it] out in some desert of forgetfulness,” but, he writes, he’s decided to send his story along to Pembroke anyway, because

you desired me to do it, and your desire to my heart is an absolute commandment. Now it is done only for you, only to you: if you keep it to yourself or to such friends who will weigh errors in the balance of goodwill, I hope, for the father’s sake, it will be pardoned, perchance made much of… Your dear self can best witness the manner, being done in loose sheets of paper, most of it in your presence; the rest by sheets sent unto you as fast as they were done… Read it, then, at your idle times, and the follies your good judgement will find in it blame not, but laugh at.1

As he imagines his adventure story being read by Pembroke and perhaps even passed around to their friends, Sidney’s self-effacing language falls somewhere between earnest vulnerability and polite humility. What’s striking about this passage is that, although it was printed as an introduction to the Arcadia, when the Arcadia was finally published, it tells a story about a different sort of textual circulation than print publication.

Sidney says that he wrote the Arcadia for Pembroke and that she’s already seen it, because he passed the manuscript pages to her as he finished writing them. He presents his writing project as a marker of his relationship with his sister, and, as he imagines his manuscript circulating more widely, he associates the reading experience with a community of friends, goodwill, and good humor. When the text isn’t published widely but is instead circulated amongst friends and loved ones, writing becomes an expression of community.

What Sidney is describing here is a sort of literary coterie, a form of writerly community that was relatively common the early modern period. Coteries valued collaboration and relationship as they helped writers to craft their literary identities. Writing Centers aren’t Renaissance coteries: where coteries were exclusive and privileged, Writing Centers are built to be democratic and inclusive, striving to welcome more and more student-writers through our doors. But circulating a text in a literary coterie—sharing something with people you trust, hoping for collaboration or critique, and using your writing to foster community with other writers and readers—echoes some of the ways that we talk about the work of a Writing Center.

Sidney’s letter to Pembroke opens a window into a writing network common in early modern England: that of the literary coterie. The term “coterie” is a bit complicated, because it was only applied to early modern writers retroactively—Sidney wouldn’t have said he was part of a coterie. But the term allows us to describe “closed circles of readers and writers” and the relationships that they developed between themselves in the early modern period, as well as gesturing towards more “porous” scribal communities.2 Whereas scribal communities could represent relatively wide networks of correspondence, coteries are more discrete. Betty A. Schellenberg defines the literary coterie as

a physically realized entity, a relatively cohesive social group whose membership may undergo shifts over time, but which is held together as a continuous identifiable whole by some combination of kinship, friendship, clientage, and at least occasional geographic proximity. Most importantly, a literary coterie’s cohesiveness is based on, and is maintained to a significant degree by, strong shared literary interests, expressed in the scribal exchange of original compositions, reading materials, and critical views.3

Coteries were held together by the social relationships that formed around reading, collaborating on, and critiquing each other’s work. As Paul Trolander and Zeynep Tenger write, “Coterie members were likely to style benefits received from their comrades as expressions of the social bonds that linked them to the group; therefore, they were likely to interpret such benefits as obligations that necessitated some return.”4

Writers in a coterie environment shaped their own literary identities around their social relationships with other members of their network: they were collaborators, critics, friends, and readers. These writers built communities through shared work—and their communities encouraged them to share more and more work in turn. Coteries provided a small audience of like-minded creators, and they fostered relationships between a group of writers and readers working together, sharing work outside of the print market. Mutual sharing fostered literary production and supported writers.

Building Community in the Writing Center

Coteries, of course, are not Writing Centers. But considering the way that coterie writers used writing to build community—and then used community to support their writing—helps show the significance of building communities when we work to support writers in the Writing Center.

In our Writing Center appointments, we often work to build rapport and connection, because that sort of sharing can create the trust that helps student writers to be vulnerable sharing their work and to engage in serious conversation about their writing. Tori Thompson Peters writes that her experience in the UW-Madison Writing Center has encouraged her to “become more willing to engage in [friendly] talk and to value it as an important part of the writing process, rather than resist it as a ‘waste of time.’” She writes,

Scholars both inside and outside of writing center studies show that friendly talk can build trust and comfort when students are feeling wary about sharing their writing. Linda Park points out that when Western professionals refuse to engage in conversation, they miss opportunities for building trust, deepening understanding, and connecting with the people they interact with. In fact, jumping into “work talk” can create more confusion or reluctance. 5

We also work to build community in our Writing Mentorships when we build semester-long relationships with the same students to meet with us from week to week. When I have developed these ongoing relationships with student-writers, I’m always excited to hear about their conference acceptances—or their cats—in the first few minutes of our appointments. Meeting the same student from week to week fosters a deeper sense of community, and (anecdotally) it seems to help students working on long-term projects to feel a sense of accountability to get things done because they already know their Writing Center tutor.

But Writing Center community isn’t just about the relationship between tutor and student writer. Writing Centers can do important work when we support community-building between student writers who can find connection with each other through their shared experience working on long-term projects like dissertations, senior theses, and articles—or just their shared experiences at the university.

Last week the UW-Madison Writing Center started up our Writing Groups for the semester. Our Writing Groups offer students the opportunity to gather together weekly with other writers to get work done, but also to share their experiences writing. We have many Writing Groups that meet weekly over the course of the semester—both for undergraduate and for graduate students—as well as a “drop-in” writing group for graduate students on Fridays who want a space to write with others but don’t want to commit to showing up every week.

open each week with a focused goal-setting activity and small- or large-group discussion about the writing process, about challenges they’re facing in their projects, or about whatever else writing related is on people’s minds. At the close of each session, the facilitator brings the group back together for the last few minutes to share progress and to set goals for the week.

Paraphrasing a graduate student writer, Earle, Miller, and Hughes write, “there is something magical about writing with or alongside others that, in addition to the supported time, keeps graduate writers coming back week after week, and, often, semester after semester.”6 That “something magical” is, I think, the same energy that works in the Renaissance coterie: writers build community through the shared experience of writing.

Building community supports writers and makes the Writing Center a more welcoming space for our students. Especially as we work to actively make the Writing Center a more inclusive space, I think it’s useful to think about the coterie model of an interdependent community of writers, learning from each other and sharing in all the experiences of writing—the exhilarations, frustrations, slow progressions, celebrations, and critiques. Writing Centers shouldn’t be Renaissance coteries, which were, by definition, exclusive and insular. But, for me, the coterie model of writerly relationship helps me think about both the importance of building connections in the tutor-writer dynamic and the importance of fostering connections between writers, as part of the work of the Writing Center. Learning from each other and from the communities of writers at the Writing Center, we can all continue learning how we can best support writerly communities across the university.

Emily L. Loney is a Ph.D. Candidate in English literary studies at the University of Wisconsin-Madison, where she also coordinates Outreach for the UW-Madison Writing Center. Her research focuses on early modern revision, gender and sexuality studies, and the writing practices of the Sidney Circle.