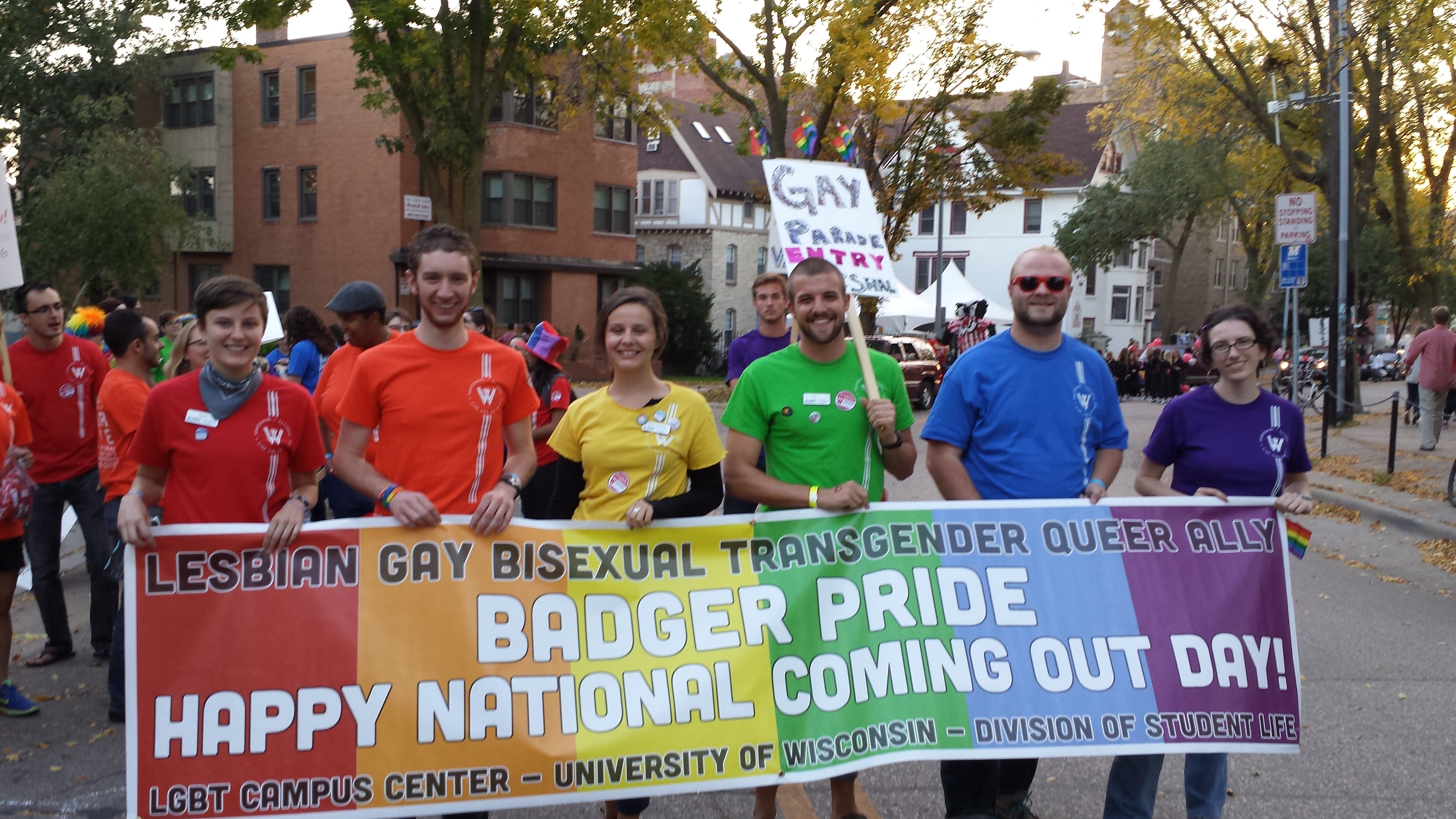 Neil is a first-year writing center instructor at UW-Madison and a graduate student in Composition and Rhetoric. He previously worked at the Agnes Scott College writing center as a tutor and coordinator. He loves cats, rabbits, and tutoring personal statements.

In a rare moment of downtime during my writing center shift, I started to read Jay Sloan and Andrew Rihn’s article “Rainbows in the Past were Gay: LGBTQIA in the WC.” Early in the article, they unearth a letter to the editor of Writing Lab Newsletter congratulating the newsletter’s return to ivory paper after several issues had been released on pink and purple paper, stating, “The rainbows in the past were gay, but as the survey results pointed out, not always compatible with the old Xerox machine.” Stark and Sloan unpack the fact that this stray mention of the word “gay” actually represents the paucity of writing center work that sufficiently addresses the needs of LGBTQ tutors and clients (I’ll use this acronym designating lesbian, gay, bisexual, transgender, and queer as my adjective of choice for talking about this particular community, for which acronyms and descriptions abound); this humorously, unintentionally queer sentence is one of the few times that the word “gay” is even used in the corpus of the Writing Lab Newsletter.

Because the lack of writing about the needs of LGBTQ students and staff in writing center literature is so stark, I wanted to use my opportunity to write a blog post for the UW Writing Center blog to reflect on some of my own experiences as a queer and trans student and instructor to start a conversation on a practical level on what LGBTQ writers might need from writing centers.

The Challenges of LGBTQ Professional Writing

Some writing centers see waves of professional writing at the beginning of the semester as graduating seniors start applying for graduate programs, jobs, and positions with organizations like Teach for America. Resumes, cover letters, and application essays are already a very high-stakes form of writing, but for LGBTQ people there are several other layers of anxiety potentially attached to these pieces. Many LGBTQ individuals gain work and service experience in college through jobs, clubs, and programs related to LGBTQ identity. When applying to graduate school or employment after college, LGBTQ applicants potentially face a double bind: How much of their work and life experience can they reveal to a potentially homophobic or transphobic employer? And if they don’t feel comfortable outing themselves in their writing, how can they represent their skills as a candidate?

This is a particularly fraught question for transgender people, because often trans folks have very little choice about whether or not they can reveal their trans identity. According to the National Center for Transgender Equality’s quantitative research study, 90% of trans people surveyed experience some form of discrimination in the workplace, 25% have lost a job for being trans, and 47% had experienced an “adverse job outcome such as being fired, not hired, or denied a promotion” for being transgender. Personally, I’ve made it all the way through an interview process and W9-form completion for a job, only to be told that it was filled after my legal name and identification did not match what was on my resume and application file. All these questions are most likely at the forefront of the minds of the LGBTQ students who sit across the table from us as they have their resumes, cover letters, and other professional writing tutored.

LGBTQ writers face many challenges in academic writing as well (often even in classes where gender or sexuality is in the title of the course). First, LGBTQ students are often the only or one of the few LGBTQ students in the classroom space. At both my alma mater, Agnes Scott College, and my graduate program at UW, I was usually one of a few queer students and almost always the only transgender student in the classroom. I have never had an instructor discourage me from exploring queerness or trans identity in my writing, but LGBTQ topics were rarely listed on my writing assignments and queer issues were not frequently the center of classroom discussion, often because those perspectives were not represented in the demographics of the class. Additionally, when I chose to write on queer or trans topics, I was often called upon by professors in the classroom space to “explain” how transgender identity worked, perhaps because I had opened myself as willing to discuss my identity in my writing.  In my undergraduate classes, peer review was sometimes a challenge, too, since other students would have trouble criticizing my work because they thought they would be criticizing my identity.

Second, when assignments from instructors offer entry into engaging with LGBTQ topics, tutors can help students navigate the tricky terrain of writing about their own identity in ways that challenge how they understand that identity to function. In my undergraduate career, after I had just been introduced to queer critiques of gay marriage’s evolution into the primary political goal of LGBTQ Americans, I struggled with how to write a paper that didn’t support gay marriage through both my own evolving political understanding and my desire to convince to a broader audience–one that would potentially support gay marriage enthusiastically or oppose it through conservative justifications that were equally oppositional to queer critiques of marriage. Tutors–both LGBTQ and straight–continue to foster the ability to work at the junction of personal identity and rhetorical and political self-presentation for me.

For me, writing centers have always been a space to queer the expectations of a writing assignment in the crucial stages of development. Writing center instructors have helped me see where I can push back on an assignment as well as how to get out of a rut of a specific kind of queer reading. The act of validating a writer’s choice to take LGBTQ identity or theories as a lens for approaching an assignment can be enormously important in their development as a writer. It can also give student’s skills and confident to push back against heterosexist and/or cissexist discourse.

Managing the Space of the Writing Center

Part of LGBTQ identity, similar to other marginalized for identity, is navigating microaggressions that occur on a daily basis. Microaggressions are a small acts of violence, often at the level of talk, discourse, or bodily interaction that can make a space feel unsafe for an individual; psychologist Derald Wing Sue has documented such action extensively, as has the blog The Microaggressions Project.

Writing centers and classroom spaces are not immune to the presence of microaggressions, and some of our practices have the potential to harm LGBTQ students through small acts of every day violence. One example of this is something as simple as writing center recordkeeping. Until fall 2013, UW-Madison provided no method for students to use a name other than their legal name on their student records. Since our records pull from inaccurate campus student records, transgender students as well as other students who use a preferred name would need to tell their name directly to the receptionists in order for them to modify our records in the writing center database. Because using many campus resources requires trans people to out themselves at the initial point of access, many trans students avoid the campus resources available to them even if the records are flexible; the initial negotiation of changing a record can be very emotionally draining. While UW-Madison has offered a phased project for students to indicate a preferred name on one’s student records, our writing center database still pulls the sex of each student. For another perspective on writing center record keeping, check out another recent post where Kirsten Jamsen, Katie Levin, and Kristen Nichols-Besel discussed ways writing centers can improve recordkeeping practices to support students in the creation of their own identities.

Tutors may create microaggressions by using familiar tutoring strategies without considering the power dynamics of the individual session, such as the strategy of “making the student the expert” by asking them to explain what they mean in their work. I use this tactic all the time very successfully in my tutoring sessions, but it must always be contextualized. When writers are writing about their own identity, asking them to “explain” unfamiliar terms can often result in placing the student in the position of discussing their personal identity rather than the paper at hand.

Tutoring as an LGBTQ Instructor

LGBTQ instructors face specific challenges both within the session and within the broader writing center community. As a transgender tutor, I am frequently misgendered in sessions, and given my role in the session and the limited amount of time that I have, I usually don’t take the time to correct my students about my gender. Occasionally, students ask me questions about transgender identity in the session that are not relevant to the task we are working on; in one session recently, a student asked me if Neil was a gender neutral name and what my “real gender” was at the end of our time together. LGBTQ tutors sometimes tutor papers that are overtly or covertly homophobic and must choose how to approach discussing that writing carefully while bracketing their emotional reactions.

As Anne Ellen Geller, Beth Boquet, Meg Carrol, Frankie Condon, and Michelle Eodice exhort us in The Everyday Writing Center, writing center workers are structural leaders as well as functional leaders on their campuses. As structural leaders, we have the power to create spaces that are welcoming to all who come as well as the power to address oppression’s micro- and macroagressions in our centers. But we also have the ability to create functional change, to “[create] change deep within and well beyond our institutions’ walls even as we manage our budgets, report on our writing centers’ activities, market the writing center, and hire, supervise and mentor our tutors.” With this in mind, I’d like to end my post by offering three suggestions for structural and functional changes that writing centers can enact to build spaces of acceptance for LGBTQ students and tutors.

Anticipate that student records will not represent many student’s preferred names and genders. While many institutions large and small honor student’s needs around their preferred names, institutional student records are often inaccurate. Creating flexibility in your recordkeeping for students who use a name other than their birth name and who might use different pronouns than legal gender records imply can help LGBTQ students feel welcome at their first point of access to writing center instruction.

Connect with campus resources that meet the needs of LGBTQ students. The LGBT Campus Center at the University of Wisconsin-Madison has both a staff of strong advocates for the needs of LGBTQ students on campus as well as a space where many LGBTQ students find a home away from home on campus. While we collaborate with the LGBTCC in terms of outreach, I imagine there are many ways we could continue working together, such as hosting workshops for LGBTQ professional writing. At many different college campuses, resource centers for LGBTQ students offer ways to grow both structurally and functionally in the campus community.

There are many other ways that writing centers can become structural and functional leaders for meeting the needs of LGBTQ students and tutors in our centers and in our universities as a whole. I’d love to hear more ideas that you have in the comments!